Why Six Sigma can be widely used in modern industries

Why Six Sigma can be widely used in modern industries

During the last few decades, advances in the high-technology and electronics industries have accelerated. The price/performance ratios continue to follow the industry idioms of more performance for lower price. Intel's Gordon Moore first proposed the law that bears his name in the late 1960s; chip complexity (as defined by the number of active elements on a single semiconductor chip) will double about every device generation, usually about 18 calendar months. This law has now been valid for more than three decades* and it appears likely to be valid for several more device generations. The capacity of today’s hard drives is doubling every nine months; and the average price per megabit have declined from $11.54 in 1988 to an estimated $0.02 in 1999.

Great expansion has also been occurring in the field of communication, both in the speed and the availability of the Internet. It is estimated that that global access to the Internet has increased from 171 million people in March 1999 to 304 million in March 2000, an increase of 78%.

In quality, similar improvements have been made, as shown by some of the numbers quoted above. These improvements have led to an increase in customer expectations of quality. Companies have responded to this increase by continuously measuring themselves and their competition in several areas of capabilities and performance. This concept, also known as benchmarking, is a favorite tool of managers to set goals for the enterprise that are commensurate with their competition. They can also gauge the progress of enterprises toward achieving their goals in quality, as well as cost, responsiveness, flexibility, and inventory turnover. Figure 1.1 is a spider diagram of U.S. versus world class benchmarks outlining annual improvements generated by Motorola in 1988, showing the range of capabilities and their annual percentage improvements over a 4 year average period. At that time, it was estimated that the average business in the United States is somewhat profitable, with market prices declining and new competitors entering the marketplace. These companies were spending 10-25% of sales dollars on reworking defects. Concurrently, 5-10% of their customers were dissatisfied and would not recommend that others purchase their products. These companies believed that typical six sigma quality is neither realistic nor achievable, and were unaware that the “best in class" companies are 100 times better in quality. 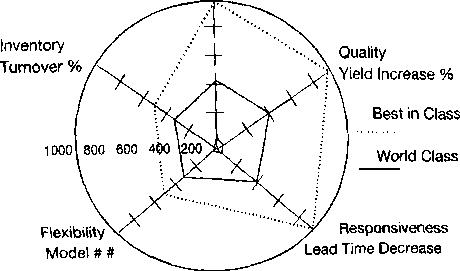 needed to compete globally. Best in class represents the best achievable annual improvements recorded anywhere， and not necessarily inthe business segment that the company competes in. It is the bench' mark of what is achievable in any measure of performance.

It is apparent that an accurate method for developing and improving quality systems in design and manufacturing as well as customer satisfaction is needed to achieve these high quality and capability results, and to compete with products that can be designed, manufactured, and sold anywhere. Six sigma is an excellent tool to achieve world class status as well as best in class results in quality, especially given the increased complexity of designs and products.

At the same time, the requirements for developing new products in high-technology industries have followed these increases in complexity and improvements in quality, necessitating faster product development processes and shorter product lifecycles. Many of the leading technology companies have created Virtual enterprises, aligning themselves with design and manufacturing outsourcing partners to carry out services that can be performed more efficiently outside the boundaries of the organization. These partnerships enabled a company to focus on its core competencies, its own product brand, its customers, and its particular competency in design or manufacturing.

These newly formed outsourcing companies are providing cost- effective and timely services. In manufacturing, they provide multi- disciplinary production; test and support services, including printed circuit board (PCB) assembly and testing and packaging technology such as sheet metal and plastic injection molding; and software configuration and support services such as repair depot and warranty exchanges. They also offer lower cost, higher flexibility, and excellent quality, eliminating the need to spend money on capital equipment for internal capacity. This new outsourcing model allows all links in the supply chain to focus on their own core competencies while still reducing overall cycle times.

In design outsourcing, the supply chain offers the flexibility of single or multiple competencies, including specialized engineering analysis and design validation, testing, and conformance to design standards for multiple countries or codes. In addition, suppliers can offer their own supply chain of strategic alliances in tooling and manufacturing services worldwide. Most of these outsourcing companies offer design feedback in terms of design for manufacture (DFM) through early supplier involvement (ESI). These design service providers have reduced the need for high-technology companies to purchase or maintain expensive engineering and design competencies, such as specific design analysis, some of which are used infrequently in project design cycles.

Several industries, especially the auto industry, have worked to standardize their relationship with their suppliers. They created the Advance Product Quality Planning (APQP) Task Force. Its purpose was to standardize the manuals, procedures, reporting format, and technical nomenclature used by Daimler-Chrysler, Ford, and General Motors in their respective supplier quality systems for their design and manufacturing. The APQP also issued a reference manual developed by the Measurement Systems Analysis (MSA) Group for insuring supplier compliance with their standards, especially QS9000. These standards contain many of the principles of six sigma and associated quality tools, such as Cpk requirements. These manuals were published in the mid-1990s and are available from the Automotive Industry Action Group (AIAG) in Southfield Michigan.