What is Quality Function Deployment (QFD)

What is Quality Function Deployment (QFD)

QFD is a structured process that provides a means for identifying and carrying the customer's voice through each stage of product development and implementation. QFD is achieved by cross-functional teams that collect, interpret, document, and prioritize customer requirements to identify bottlenecks and breakthrough opportunities.

QFD is a market-driven design and development process resulting in products and services that meet or exceed customer needs and expectations. It is achieved by hearing the voice of the customer, directly stated in their own words, as well as analyzing the competitive position of the company^ products and services. Usually, a QFD team is formed, consisting of marketing，design, and manufacturing engineers, to help in designing new products, using customer inputs and current product capabilities as well as competitive analysis of the marketplace. QFD can be used alternately for new product design as well as focusing the efforts of the QFD team on improving existing products and processes, QFD combines tools from many traditional disciplines, including engineering, management, and marketing.

Tools such as structured analysis or process mapping，which is a top- down division of requirements into multiple elements in several charts, each related to a requirement in the higher chart, are employed. An example of two tiers of structured analysis is given in Figures 1.6 and 1_7 and will be discussed later in this chapter.

Tools such as decision analysis (DA) or criteria rating (CR) are employed. This technique consists of breaking a complex decision into distinct criteria, ranking each alternative decision versus each criterion, then adding the total weighted criteria to determine the most effective overall decision. An example of criteria rating is the decision on a soldering material for PCB assembly given in Table 1.1. There are four alternatives being considered by the selection team, and the criteria for the decision are listed on the left side of Table 1.1, each with its own weight or rank of importance. The selection team decides on the criteria topics and their relative weight based on team discussions and members* individual experiences. Each alternative soldering material is then rated against each criterion, and a relative score is given. In this example, both the criteria weight and the alternative score were recorded with a maximum value of 10. This choice is arbitrary and smaller numbers can be used for the maximum, such as 3, 5, or 9. Each alternative score is multiplied by the criteria weight and recorded in the table. The total weighted score for each alternative is then calculated, and the final decision is selected based on the highest score. In the case shown in Table 1.1, alternative D has the highest score and should be selected.

Tools such as customer surveys and competitive analyses are employed. These are traditional elements used by marketing to determine customer needs and perceptions about the company^ products versus their competition.

In its simplest form, QFD could be used as a relationship matrix whose input is the customer requirements or needs, and outputs are the product specifications. The QFD process is an interaction between the customer needs and the product characteristics, tempered by a competitive analysis and a ranking of the importance of the different customer needs. The QFD matrix is commonly known as the “house of quality," or QFD chart. A simplified approach to the general QFD chart is shown in Figure 1.2. The “hat” on top of the matrix is used to indicate the presence, if any, of interaction(s) between the various products design characteristics. This interaction should be considered when setting the final product specifications. For example, in a disc design, changing the disc characteristic or storage capacity might influence other characteristics such as the data access time for the disc.

The relation between the customer needs and the product characteristics can be considered by the QFD team as having one of four states: strong, medium, weak，or none. Each customer need is given an importance ranking, and that ranking is multiplied by the relationship to generate a total score for each of the product design characteristics. In some cases, the importance ranking could further be modified by the marketing emphasis on that customer need. For example, lighter weight of a product might be considered an important customer need, and customer feedback indicated it should be ranked as medium in importance, for a value of 5. Marketing managers might decide that the new product could compete better if they could emphasize this attribute as a sales point. The importance level could be multiplied by a factor of two, increasing its value to 10. In this manner, the design of the product is forced to be of lighter weight than would otherwise be indicated by the customer’s wishes.

A high characteristic total score indicates that the design characteristic is important and the related specification should be enhanced, either in the positive or negative direction, depending on the direction of “goodness” of the specification. A low score indicates that the specification of the current product design is adequate, and should be left alone or even widened or decreased in value. In this manner, QFD acts as a guide to the design team on what areas of design or specific -ations to improve, and which others could be left alone.

QFD could be used as a design tool to generate appropriate specifications for new product designs based on customer expectation and competitive analysis as well as marketing inputs. An example is given by Figure 1.3, a modified QFD matrix for the design of a new cable TV connector by Raychem) Corporation. This case study was authored by Marylin Liner and published in a book edited by the author (Shina, 1994>. Only a portion of the matrix is shown for brevity. Several customer needs obtained from a survey of cable installers are shown, with each having an importance rating (not shown). The relationships are outlined in the top left-hand part of the matrix, with a strong relationship given a value of 9 instead of the commonly used 5, to emphasize the strong customer input contribution in the design of the product. Some of the product characteristics are shown at the top of the matrix. The QFD relationship matrix output is the target value of the design characteristics, where symbolic numbers are shown. The arrows at the bottom show the direction of the enhanced specifications. One of the product characteristics, the number of installation modes, scored the highest total for weighted requirements. This indicated a need for the most important specification change, to a smaller number indicated by the arrow. Hence, the target value or specification for the number of installation modes was assigned a 1. Another product characteristic, the force on equipment panel, which also scored high on weighted requirements, should have its target value or specification raised to a higher value, noted symbolically in the figure in units of weight (lbs.).

A QFD example for improving the quality of a manufacturing process is shown in Figure 1.4. In this case, the PCB assembly, consisting of surface mount technology (SMT) solder processes, was analyzed, The QFD team used the QFD process to identify customer needs for quality and delivery of PCBs and rank their importance, as well as the process characteristics of various dements in SMT manufacturing， such as process steps and suppliers of PCBs. The customers of PCB assembly were the personnel in the next stage of production: final product assembly and test technicians. The output of the QFD chart indicates which process element was the most important in meeting customer needs. This is the element that the team should focus on to reduce process defects or manufacturing variability. In the example given in Figure 1.4, the relationship matrix and their calculations for the weighted requirements are outlined. It shows that the team should work most effectively on improving the quality of the screening process before all others, to increase internal customer satisfaction. Indeed, the team decided to run a DoE to optimize the process, similar to the DoE example 8.2.4, given in Chapter 8.

The results of the analysis, or the weighted requirements, are determined by multiplying the importance factor by the relationship strength. The screening operation achieved the highest score, indicating that customer needs are best satisfied when that process is improved before the others. This chart represents the analysis by the QFD team at that moment in time, and their collective findings; it does not necessarily reflect a universal solution to improving an SMT process. 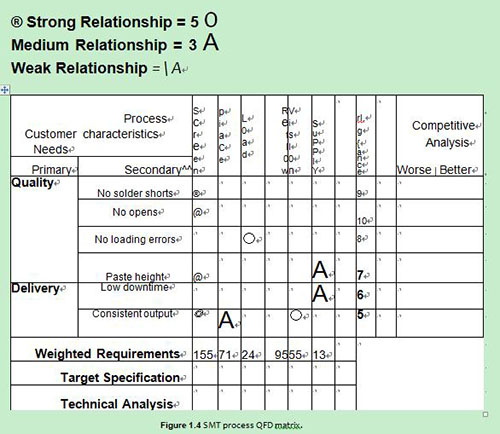 The competitive analysis portion of the QFD chart is used mostly for product design. It outlines the team’s evaluation of the position of the company s current products against the competition as perceived by the customers. The team could decide to counteract a particular deficiency of the current design in meeting one of the customer needs, and therefore add a multiplier to the importance factor. This multiplier forces the design team to focus on reversing this deficiency in the new product. This occurs when the deficient customer need generates a higher score when multiplied by the importance factor.

As was shown by both design and manufacturing examples, QFD can be an excellent tool to improve the design quality and to attain six sigma levels through focusing on customer needs. In the design example, it can be used to show which specifications should be widened and which can be left alone or even reduced. Widened specifications would affect the numerator of the six sigma equation, making the goal of six sigma easier to achieve. In the manufacturing example, it was used as a defect reduction tool by the manufacturing quality team to identify which process should be investigated to reduce defects and hence manufacturing variability. Such processes could undergo a design of experiments (DoE) project to reduce variability, which is the denominator of the six sigma equation.

It is important to note that QFD is a process designed to solicit customer needs from experienced users of established products or processes. In both examples, those directly involved in the use of the product, such as cable installers or the recipients of PCBs, were part of the customer needs assessment. Products and processes using new technology would benefit less from QFD. For example，it would not be beneficial for slide rule users to quantify their experience into customer needs for calculators. In this case, more traditional marketing research methods could substitute for QFD.