Control charts have been traditionally used as the method of deter- mining the performance of manufacturing processes over time by the statistical characterization of a measured parameter that is dependent on the process. They have been used effectively to determine if manufacturing is in statistical control. Control exists when the occurrence of events (failures) follows the statistical properties of the distribution of production samples.

Control charts are run charts with a centerline drawn at the manufacturing process average and lines drawn at the tail of the distribution at the 3 o points. If the manufacturing process is under statistical control, 99.73% of all observations are within the limits of the process. Control charts by themselves do not improve quality. They merely indicate that the quality is in statistical “synchronization” or “in control” with the quality level at the time when the charts were created.

A conceptual view of control charts is given in Figure 2.1. The out- of-control conditions indicate that the process is varying with respect to the original period of time when the process was characterized through the control chart, as shown in the bottom two cases. In the bottom case, the process average is shifted to the right, whereas in the next higher case, the process average is shifted to the left. For the two processes shown in control, the current average of the process is equal to the historical one that is centered with the historical average, and with a small amount of variability, indicating that the standard deviation is small. It is important to note here that the control charts do not reflect the relation of the process to the specification limit, only the performance of the process to historical standards. Six sigma gives that additional dimension of relating the process performance to the specification tolerance. 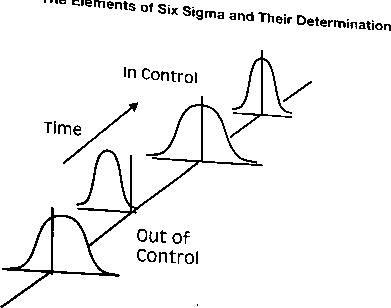 2. The relationship of control charts and six sigma

There are two major types of control charts: variable charts, which plot continuous data from the observed parameters, and attribute charts, which are discrete and plot accept or reject data. Variable charts are known as X and R charts. They can be directly related to the six sigma calculations through the product specification. Attribute charts are measures of good or bad parts, and therefore are indirectly related to specifications. The relationship of attribute charts to six sigma is that of an assumed set of specifications that produces the particular defect rate plotted in the charts. More on these charts in the next chapter.

The selection of the parameters to be control charted is an important part of the six sigma process. Too many parameters plotted tend to adversely confuse the beneficial effect of the control charts, since they will move together in the same direction when the process is out of control. It is very important to note that the parameters selected for control charting are independent from each other and are directly related to the overall performance of the product. When a chart shows an out-of-control condition, the process should be investigated and the cause of the problem identified on the chart.

When introducing control charts to a manufacturing operation, it is preferred to use parameters that are universally recognized and with simplified data collection, such as temperature and relative humidity, or take readings from a process display monitor, such as the temperature indicator in a soldering system. These initial control charts can be used to introduce and train the operators in data collection and plotting of parameters. The same principles in selecting these elements also apply to six sigma parameter selections.

Electronic products are manufactured using materials and processes that are inherently variable. Design engineers specify materials and process characteristics to a nominal value, which is the ideal level for use in the product. The maximum range of variation of the product characteristic, when products are in working order (as defined by customer needs), determines the tolerance of that nominal value. This range is expressed as upper and lower specifications limits (USL and LSL), as shown in Figure 2.2.

The manufacturing process variability is usually approximated by a normal probability distribution, with an average of (JL and a standard deviation of a. The process capability is defined as the full range of normal manufacturing process variation measured for a chosen characteristic. Assuming normal distribution，99.74% of the process out- put lies between μ- 3σandμ+ 3σ

A properly controlled manufacturing process should make products whose average output characteristic or target is set to the nominal value of the specifications. This is easily achieved through control charts. If the process average is not equal to the product specification nominal value, corrective actions could be taken, such as recalibrating production machinery, retraining the operators, or inspecting incoming raw material characteristics to fix this problem.

Process capability could be monitored using control charts. The manufacturing process variability can be reduced by increased operator training, using optimized equipment calibration and maintenance schedules, increased material inspection and testing, and by using design of experiments (DoE) techniques to determine the best set of process parameters to reduce variability.

A good conceptual view of this argument is the use of the term “capability.” A process could be either “in control,” or “capable,” or both. Obviously, the desired condition is both in control and capable, as shown in Figure 2.4. Six sigma assures that the desired outcomes are processes that are highly capable and always in control. If there is a short-term out-of-control condition in manufacturing, then the robust- ness of the process，which is its capability versus its specifications, is good enough to withstand that deviation and continue to produce parts with low defects. 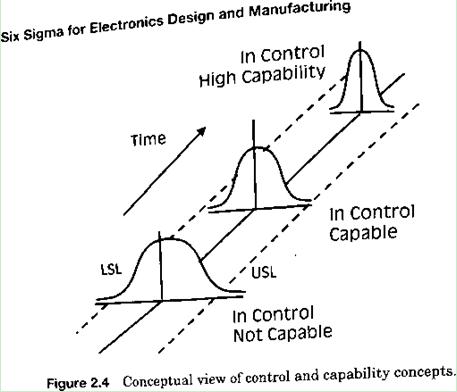 There are two methods used to increase the quality level and hence approach six sigma for new product designs: either increase the product specification limits to allow manufacturing variability to remain the same, or keep product specifications limits constant and reduce manufacturing variability by improving the quality level of materials and processes. The latter can be achieved through inspection, increased maintenance, and performing design of experiments (DoE) to determine variability sources and counteract them. The ratio of the interaction of two sources of defect is the measure of design for quality, called the process capability index or Cp. Six sigma is a special condition in which Cp is equal to 2:

The Cp value can predict the reject rate of normal probability distribution curves. A high CP index  indicates that the process is capable of replicating faithfully the product characteristics, and therefore will produce products of high quality.

The utility of the Cp index is that it shows the balance of the quality responsibility between the design and manufacturing engineers The quality level is set by the ratio of the efforts of both. The design engineers should increase the allowable tolerance to the maximum value that still permits the successful functioning of the product. The manufacturing engineers should minimize the variability of the manufacturing process by proper material and process selection, equipment calibration and control, operator training, and by performing design of experiments (DoE).

An example of design and manufacturing process interaction in the electronics industry is the physical implementation of electronic designs in printed circuit board (PCB) layout. The design engineer might select a higher number of layers in a multilayer PCB, which will speed up the layout process because each additional layer increases the PCB surface available for making electrical connections. Speedier layout time could result in a faster new product introduction, bringing in new revenues into the company faster. Minimizing the number of layers requires more layout time, but would produce lower-cost PCB's and fewer defects, because there are fewer process steps. This is a classical case of the balance between new product design and development expediency and manufacturing cost and quality.