Control charts have been traditionally used as the method of determining the performance of manufacturing processes over time by the statistical characterization of a measured parameter that is dependent on the process. They have been used effectively to determine if the manufacturing process is in statistical control. Control exists when the occurrence of events (failures) follows the statistical laws of the distribution from which the sample was taken.

Control charts are run charts with a centerline drawn at the manufacturing process average and control limit lines drawn at the tail of the distribution at the 3 s_points. They are derived from the distribution of sample averages X, where s is the standard deviation of the production samples taken and is related to the population deviation through the central limit theorem. If the manufacturing process is under statistical control, 99.73% of all observations are within the control limits of the process. Control charts by themselves do not improve quality; they merely indicate that the quality is in statistical “synchronization” with the quality level at the time when the charts were created.

The selection of the parameters to be control charted is an important part of the six sigma quality process. Too many parameters plotted tend to adversely affect the beneficial effect of the control charts, since they will all move in the same direction when the process is out of control. It is very important that the parameters selected for control charting be independent from each other and directly related to the overall performance of the product.

When introducing control charts to a manufacturing operation, it is beneficial to use elements that are universally recognized, such as temperature and relative humidity, or take readings from a process display monitor. In addition, the production operators have to be directly active in the charting process to increase their awareness and get them involved in the quality output of their jobs. Several shortcomings have been observed when initially introducing control charts. Some of these to avoid are:

• Improper training of production operators. Collecting a daily sample and calculating the average and range of the sample data set might seem to be a simple task. Unfortunately, because of the poor skill set of operators in many manufacturing plants, extensive training has to be provided to make sure the manufacturing operator can perform the required data collection and calculation.

• Using a software program for plotting data removes the focus from the data collection and interpretation of control charting. The issues of training and operating the software tools become the primary factors. Automatic means of plotting control charting should be introduced later in the quality improvement plan for production.

• Selecting variables that are outside of the production groups direct sphere of influence, or are difficult or impossible to control, could result in a negative perception of the quality effort. An example would be to plot the temperature and humidity of the production floor when there are no adequate environmental controls. The change in seasons will always bring an “out-of-control” condition.

In the latter stage of six sigma implementation, the low defect rate impacts the use of these charts. In many cases, successful implementation of six sigma may have rendered control charts obsolete, and the factory might switch over to TQM tools for keeping the quality level at the 3.4 PPM rate. The reason is that the defect rate is so low that only few defects occur in the production day, and the engineers can pay attention to individual defects rather than the sampling plan of the control charts. 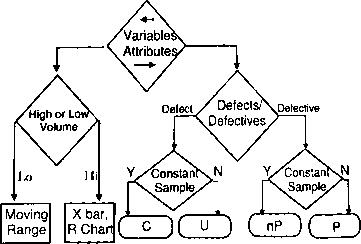