Control chart guidelines, out of control conditions, and corrective action procedures and examples

Control chart guidelines, out of control conditions, and corrective action procedures and examples

Figures 3.2 and 3.3 are examples of X and R charts showing the solder paste height deposition process for a surface mount technology (SMT) process. Several observations can be made from examining these charts:

1. In Figures 3.2 and 3.3, the two charts, X and R, are measuring process average and process variability, respectively. Although one might be out of control, the other one is not, or vice versa. This is due to the independence of the two attribute of the process. 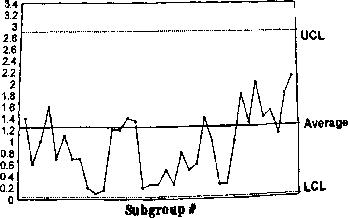 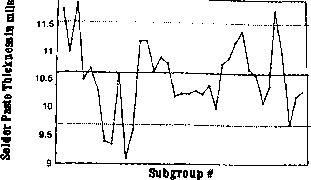 (the factor for n = 4 from Table 3.1), resulting in 0.9125. This is the approximate distance from the X (sometimes called the center- line or CL) to one of the control limits in the X chart.

3. The frequency of taking samples for control charts is left up to the manufacturing process quality status controller. For high-quality processes, a daily sample for each shift is adequate to ensure conformance. For production lines with frequent quality problems, more sampling might be required, depending on the number of parts being produced or the number of hours since the last sample. This is necessary if reworking out-of-control parts is required. In this case, material or parts produced since the last good sample plot on the chart has to be reworked. In addition, The problem has to be investigated by production engineers and possible causes recorded on the chart. The production engineer may require that more frequent samples be taken until the process is more stable. Figure 3.4 is an example of such a condition for a bonding process for plastic parts. 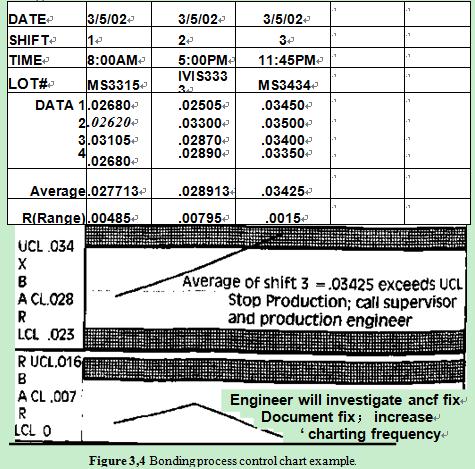 4.The control limits should not be recalculated unless there is a change in the manufacturing process. Examples could be new materials, machinery, operators, or process improvement projects. When a chart shows an out-of-control condition, the process should be investigated and the reason for the problem identified on the chart. Figure 3.5 shows a typical scenario of plotting a parameter (in this case the surface cleanliness measurements on PCBs), which was necessitated by a defective laminate lot. Note that the new lot has significantly increased the resistance value, which would necessitate recalculating the control limits.

5. In the X chart, the upper and lower control limits are usually symmetrical around the X or the centerline, as shown in Figure 3.3. In the case of a maximum specification, only one control limit is sufficient. In the R chart, symmetry is not necessary when the sample size is less than 7, since D3 (the control factor for the lower limit) is equal to zero.

6. In many six sigma manufacturing plants，manufacturing has added additional information such as the specification limits, and then calculated the Cp or Cpk on the control charts. This can easily be done, as shown in examples earlier in this chapter, by deriving cr either from the R or s calculation in step 2, using the formulasσ = s • orσ = R/d2. 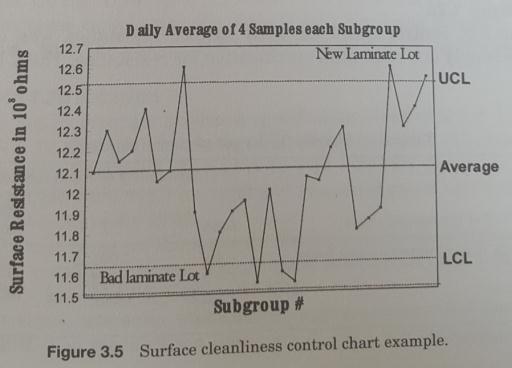