Example of Calculating Yield in A Part with Multiple Operations

Example of Calculating Yield in A Part with Multiple Operations

In Figure 4.1, the wire bonding of an IC is shown. The chip is centered in the middle of the IC package frame, and wires are bonded from the chip to the frame. There are two bonds per IC termination. If there are 256 connections in the IC frame, and the bonding operation DPU is 100 PPM, what is the FTY for the bonding of an IC? 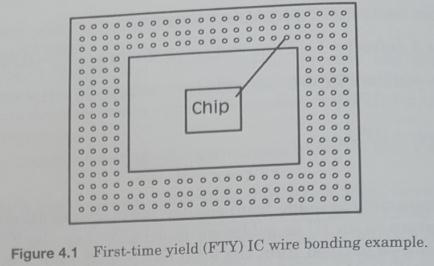 It can be seen that the FTY actual, which is the most accurate, is closely approximated by the Poisson distribution, and is exactly equal to the power expansion. These differences are small at the 100 PPM level，which is approximately four sigma quality. In the case of poor quality> such as those below two sigma> the differences in the calculated yield among the three methods become large. In that case, using the actual calculations is the most prudent way to obtain the yield. Note that the resultant five defects don’t necessarily imply that five ICs are defective; one IC could have more than one defect.