Atypical PCB test method comparison is given in Table 4.5. It can be seen that the test time increases with the complexity of the test per- formed. More complicated tests allow for a higher removal of defects， resulting in greater yields from these test methods. The cost of the re- pair cycle for each method is also shown; it increases geometrically as the test complexity increases. The defects that are not culled out at test could escape to the customer, be it the next-higher level in the manufacturing operation，or the actual paying customer.

Table 4.5 shows three scenarios of PCB test strategy. Scenario 1 is that of typical three sigma company that is performing a good job of manufacturing control through control charting, but has not yet implemented the goals of six sigma quality improvement programs- The assembly yield of 60% prior to test is typical of in-control but not capable assembly operations, as shown in Example 4.3.2 for PCBs with 500 components. In many of these operations, visual inspection, is used in order not to overwhelm the in-circuit (IC) test operations. Visual tests bring up the assembly yield to 80% by removing 50% of the defects in the PCBs. The in-circuit test design in three sigma operations is targeted at 95% yield into the functional test (FT). The FT test produces PCBs with 99.8% yield, resulting in a defect rate of 0.2% that will escape to the customer. This defect rate is close to the three sigma assembly process output of 2700 PPM or 0.27%. Table 4.6 shows two different strategies using scenario 1. One test strategy uses visual inspection, the other does not，taking the PCB’s directly into in-circuit testing. The second strategy removes the high labor cost and low job satisfaction of visual test, and shifts the burden of removing defects to in-circuit testing. It can be seen from the two strategies that the operational costs are the same, resulting in a cost of $18.50 per PCB when the production rate is assumed to be at 100,000

pCBs. Therefore, most companies would opt for the non-visual test strategy, because automatic testing is usually more predictable than manual inspection. In addition, in-circuit testing can be improved with better equipment, whereas visual testing would not greatly increase in efficiency with increased operator experience. 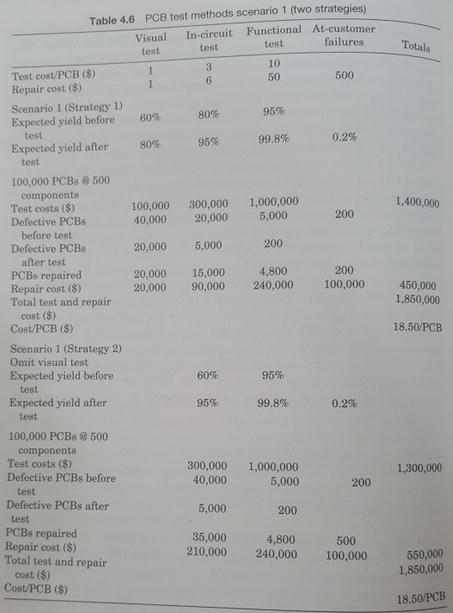 In order to properly devise the best strategy for scenario 1, more information will have to be collected. This would include the capital and depreciation costs of the in-circuit equipment and fixtures, as well as the resources needed to maintain and repair them. More discussion is given on that in Chapter 6.

Scenario 3 is that of a six sigma company. The test method summary is given in Table 4.8. In this case, the PCB assembly area yield increases to 95%, and the defects from the assembly line escaping to the customer are reduced to six sigma levels. The in-circuit test has a cur- rent limit of four sigma or 99.8%. For this scenario, three strategies are given: 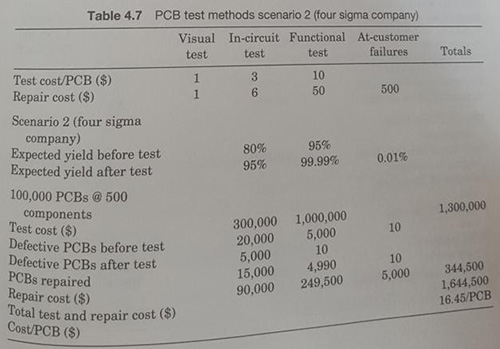 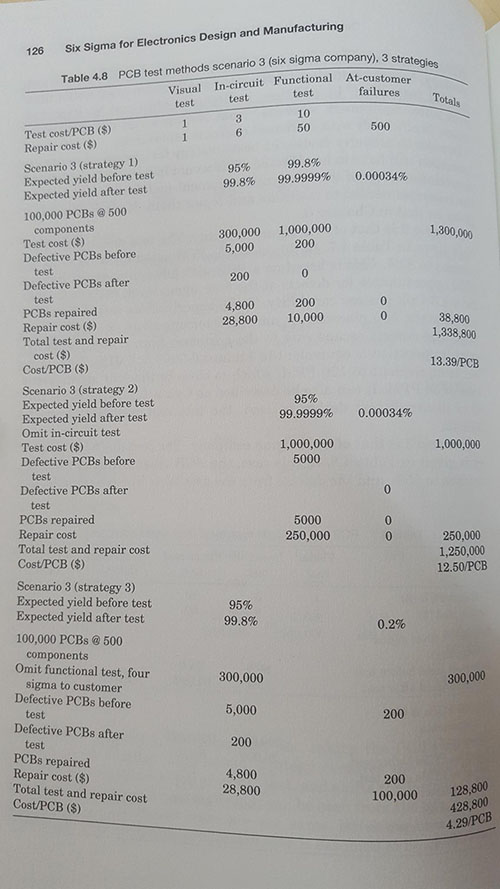 Strategy 1 is a follow-on from scenario 2, in which the cost is reduced with less in-circuit and functional testing because of the higher quality coining from PCB assembly.

•Strategy 2 eliminates the in-circuit test, allowing only for a functional test, and the cost is further reduced.

•Strategy 3 is the obvious lowest-cost one, in which functional testing is omitted and only in-circuit testing is used. However, strategy 3 violates the six sigma and TQM tenets of not passing on defects to the customer, and will await further improvements in in-circuit test technology.

It can be readily seen that achieving six sigma in assembly can have a great impact on reducing the cost of test and repair.