Process Average and Standard Deviation Calculations for Samples and Populations

Process Average and Standard Deviation Calculations for Samples and Populations

The knowledge of certain properties of a subset (sample), can be used to draw conclusions about the properties of the whole set (populations). Properties can be of two types, as discussed in earlier chapters:

1. Quantitative (variable). These properties can be observed and recorded in units of measure such as the diameter of shafts. The units are all produced under replicating conditions in production.

2. Qualitative (attribute). These properties can be observed when units are being tested with the same set of gauges or test equipment; for example, the set of all shafts produced under the same conditions, either fitting or not fitting into a tester consisting of a dual set of collars. A shaft with a diameter within specifications should fit into one of the collars whose diameter is equal to the shaft upper specification limit, and the shaft should not fit into the other collars whose diameter is equal to the lower specification limit.

The sample size (?i) is the random choice of n objects from a population, each independent of each other. As rt approaches c〇, the sample distribution values of average and standard deviation become equal to that of the population.

It has been shown in Chapter 3 that variable control charts constitute a distribution of sample averages, with constant sample size n. 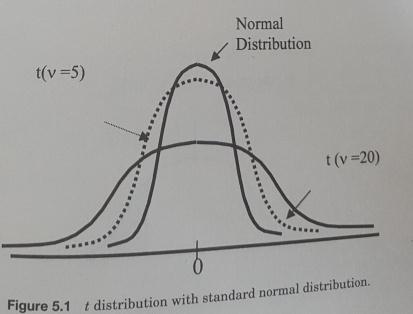 where t is a random variable having the f distribution with v = n -  1 .

Table 5.1 shows a selected set of the values of ta. The t distribution is used in statistics to confirm or refute a particular claim about a sample versus the population average. It is always assumed that the parent distribution of the t distribution is normal. This is not easily verified using the formal methods discussed in Chapter 2, since the sample size is small. In most cases, the graphical plot method of the sample data discussed in Chapter 2 is the only tool available.

Historically, the confidence percentage used depended on the particular products being made. For commercial products, a 95% confidence level is sufficient, whereas for medical and defense products, which require higher reliability, 99% confidence has been used. 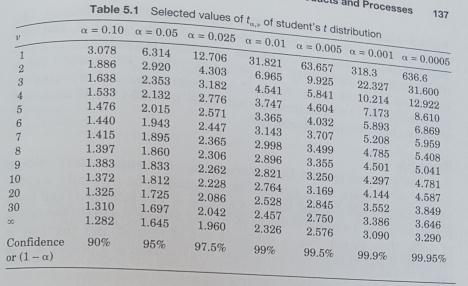