Standard deviation for samples and populations

Standard deviation for samples and populations

The statistical relationships of the sample and population averages have been discussed in previous sections. There is a similar distribution for the sample variability s2, which can be used to learn about its parametric counterpart, the population variance or CT2. This distribution is called the chi square or x2. Since the distribution cannot be negative, it is not symmetrical, but is in fact related to the gamma distribution. The x2 distribution is shown in Figure 5.4. The probability that that a random sample produces a x2 greater than some specified value is equal to the area of the curve to the right of the value. The variable xa2 represents the value of x2 above which there is the area a. The equation for the distribution variable is as follows: 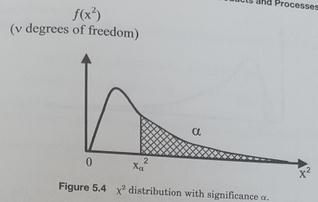 where s2 is the variance of a random sample of size n taken from a normal population having the varianceσ2, and x2 is a random variable having the distribution with degrees of freedom v = n — 1.

Table 5.3 contains selected values of the x2 distribution. Since it is not symmetrical, two x2 values will have to be returned when confidence percentages are needed for two-sided limits, as can be seen in Figure 5.5. As in the t distribution, the X2 distribution can be used in two cases： 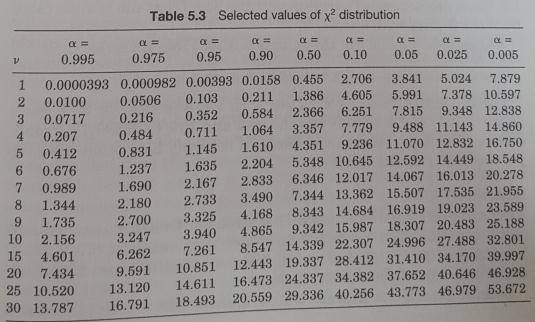 2.When the population varianceσ2 is not known, and the sample variance s2 is used to determineσ2, with confidence limits and confidence intervals. The equation for this case is as follows:

where s2 is the variance of a random sample of size n from a normal population, confidence interval forσ2  is (1 - α)%，and X21_α/2 and x2-α/2 are values having areas of a/2 and -a/2 to the right and left of the distribution average.