In this example, the specification for the peel strength for a mechanical bonding assembly was increased using an L9 DoE. An RTV adhesive was selected as the bonding agent (glue). Parts were cleaned prior to bonding in an ultrasonic bath filled with a cleaning chemical and a measured volume of glue was applied to both halves of the parts. Parts were then cured in an oven after bonding. The levels for cleaning time and chemical as well as curing temperature were arbitrarily selected in the design stage of the product. The product was not performing adequately in the field, as several parts separated during customer use. A DoE experiment was designed to increase the bonding process for maximum peel strength. It was decided to measure the peel strength by a special spring force tool, which is commonly used to determine the maximum outside force necessary to cause the parts to separate.

A DoE team was formed and the team decided to use a three-level L9 orthogonal array with four factors in order to maintain the current process settings as the middle level. The levels of the factors were then varied up and down in order to observe their effects. Four factors were considered in the L9 array: the cure temperature at 30°C (room temperature), 50°C (the current mild oven bake), and 70°C (a higher level of oven bake). The effect of ultrasonic cleaning, which was used in cleaning the parts, was to be tested after immersion in a chemical for 1, 3, and 5 minutes, with 3 minutes being the current time. The volume of RTV dispensed, using different dispensing heads, was varied around the current volume of 1.7 cc. The values were 1.2 cc, 1.7 cc, and 2.5 cc, respectively, which corresponded to commercially available dispensing heads. Finally, the soak chemical used in the ultrasonic bath was varied from the current methylene (MET) to other cleaners such as methyl ethyl ketone (MEK) and plain water (H20). Although other factors were considered, such as different bonding materials or the humidity of the bonding environment, the team did not elect to use these factors either because of cost of the material or resources needed to change the production environment.

The experiment was designed as shown in Table 7.12. There were nine experiments; each experiment was a unique combination of factor levels selected prior to the its running. For example, in experiment number 3, 30°C was the cure temperature in the oven, the RTV volume was 2.5 cc, the ultrasonic cleaner was MEK, and the cleaning time in the ultrasonic bath was 5 minutes. The experiment resulted in an average of 24.11 pounds of pressure applied before separating- the assembly into two halves.

The graphical data analysis for the experiment only requires the use of a four-function calculator and is shown in Table 7.12 and Figure 7.6. The effects of each level were added, then averaged as to the contribution of each level of each factor. For improving the process, the highest average output for each factor level can be selected: A3 (70°C), B2 (3 minutes), CS (2.5 cc RTV volume), and -Dl (water). The following conclusions can be drawn from this experiment:

•       The graphical analysis chart can be completed easily. Mathematical mistakes in the analysis table are minimized because all factor averages must add up to the same number (217 in this case),

•       The most important factor is the cure temperature (factor A), since it causes the most change in output. 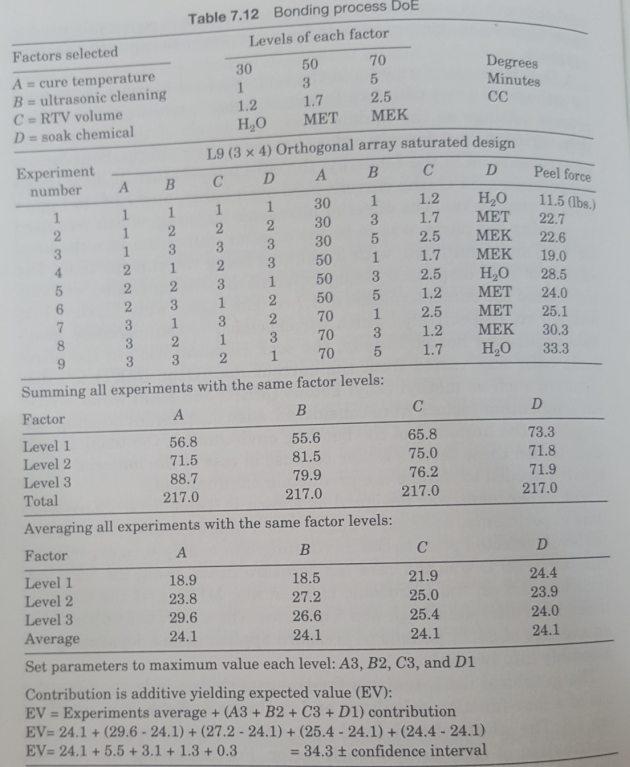 •       The least important factor is the soak chemical (factor Dl since it hardly made a difference.

•       The combination of the selected levels for the four factors {A3, B2y C3, and Dl) is not within the L9 array table (it is within the 81 experiments of the full factorial array). By using saturated design, it was only necessary to perform nine experiments instead of 81 in order to find the optimum set of factors levels. However, the interaction of the factors cannot be calculated, and the confounding of the factors might render some of the factor effects incorrect.

•       The selection of the factors appears to be appropriate, since the goal of increasing the peel force was successfully achieved.