The arrays most commonly used in the design of experiments are the orthogonal arrays. These arrays are balanced: there are an equal number of levels for each factor in the experiments. The behavior of each factor level can be studied while other factors are changing their levels. This technique results in an array matrix with n columns and n + 1 experiments with two level factors.

Orthogonal arrays are different from the one-factor-at-a-time experiments, as shown in Table 7.1. In this design, shown with four factors and two levels, the first experiment consists of all of the factors set to level 1. Additional experiments are added in which the factor levels are varied to the second level individually, while the rest of the factors are kept constant. There are many deficiencies in this technique: it does not allow for measuring the effect of varying the other factors at the same time as the one factor being changed. This mathematical relationship of factors, called factor interaction is very important, and needs to be analyzed to take full advantage of DoEs. Orthogonal arrays can measure interactions through several techniques:

1. Full factorial DoEs are used to evaluate the effects of all factors and their interactions. For every number of factor columns n, there are at least n - 1 interactions column to be considered; and form levels there are an experiments. For example, If four factors are considered (A, By C, and D) with two levels, there are H interactions such as AB, AC, AD, BC, BD, CD, ABC, ABD, ACD, BCD, and ABCD, and 16(24) experiments. The levels in the interaction columns are derived from the multiplication of the levels of the originating factors, using an exclusive OR (XOR) logical formula shown in Table 7.2. For full factorial designs, the number of experiments increases geometrically as the number of factors increases.

3 Saturated Design DoEs are Resolution III designs that allow all of the columns in the OA to be assigned to different factors. They represent a minimum set of experiments for the number of factors considered. They are called “screening designs” because they are commonly used to whittle down the number of factors quickly through smaller DoEs，then full factorial DoEs can be performed on the remaining factors. The assumption in saturated designs is that interactions are small and can be ignored compared to the main factor effects. 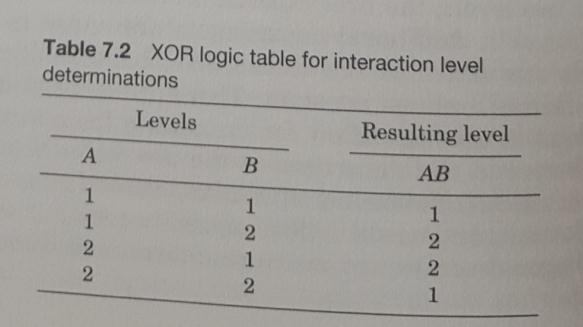