An example is an investigation into the technology of solder deposition using stencils for SMT PCBs. The DoE should examine alternative technologies from different suppliers, and rate the soldering quality produced by the stencil types. The following is a discussion of the issues encountered and decisions to resolve them in the DOE. These issues could be useful when conducting similar survey DoE's:

• The factors chosen were the stencil technologies available. They differed in the creation of the holes for depositing the solder paste on the surface of the PCB^. The technologies included band, chemical etching, laser drilling, and electroforming. Several suppliers for each technology were included for a total of eight levels of stencils. Other factors included the use of paste with or without aqueous cleaning (C or NC) after soldering, snap-off distance (5 or 0 mils), squeegee pressure (35 or 30 lbs), lead orientation angle of the components (90 or 0 degrees from the squeegee travel), and lift-off pressure (75 or 60 lbs).

• Other known factors affecting solder deposition were fixed for this DoE. They included the stencil thickness of 0.006^ (6 mils), stencils with aperture sizes of 10 x 55 mils, and using the same stainless steel squeegee for all experiments. One squeegee pass at the same speed was used for all experiments. These factors were determined to be not significant in earlier experiments.

• The stencils were used to deposit solder paste on bare copper substrate for all experiments. 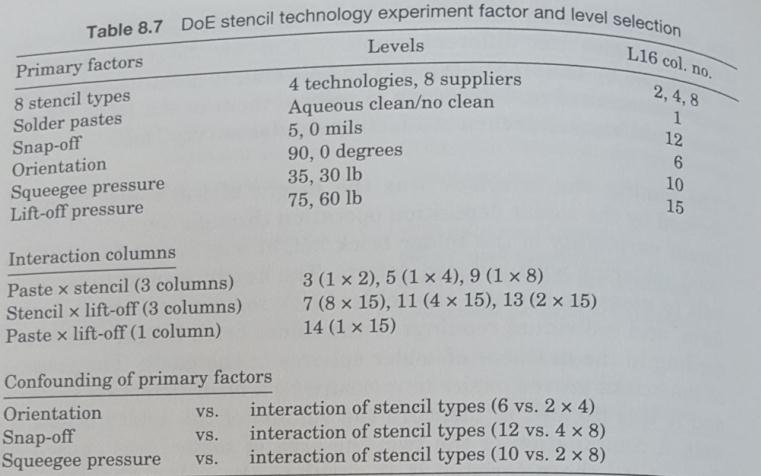 An L16 orthogonal array was used. The factor assignments are shown in Table 8.7. The selected factors were assigned to specific columns so that the interactions of interest were isolated. The eight levels of stencil technology were used in a multilevel combination column, consisting of the columns 2, 4, and 8. The interaction of the columns forming the stencil levels were confounded with some of the other factors, as shown in Table 8.7 • A total of 480 points were measured for the experiments, consisting of 10 replications of the 16 experiments in the L16 design. Each replication consisted of taking 10 points measured three times on the deposited solder pattern on bare copper substance.

The L16 design is presented in Table 8.8, with the interaction columns not shown. The ANOVA analysis is shown in Table 8.9, with the percentage contributions only. The total degrees of freedom (DOF) is equal to number of experiment lines minus 1. The DOF of the stencil factor is equal to three, since three columns with two levels each were used. The interaction of the paste and stencil was also equal to three, since three stencil columns were used.