In mechanical design, statistical design analysis can be substituted for worst-case tolerance analysis. A case study in mechanical design tolerance analysis is that of a typical vibrating probe that is used for angioplasty medical operations. As shown in Figure 8.8, it consists of a vibrating element of wires wound around a magnetic barrel, and a cover to enclose the assembly. The vibrating barrel has an outside diameter 0.0075 士 0.0002 inches，and the winding coil around the barrel has an outside diameter equal to 0.0027 ± 0.0002 inches. The wires and vibrating barrel were purchased from outside suppliers, and therefore had fixed tolerances. The designer is faced with a dilemma: If the cover specifications are too loose, then the mechanical assembly gap between the cover, barrel, and the wires is too large, causing the assembly to come apart. If the cover specifications are too tight, then the mechanical assembly design has interference. The statistical analysis allows for the best design to meet this contrasting set of conditions.

Using statistical design analysis, based on the RSS values ofσ, the design quality prior to manufacturing can be calculated as follows (Table 8.13): 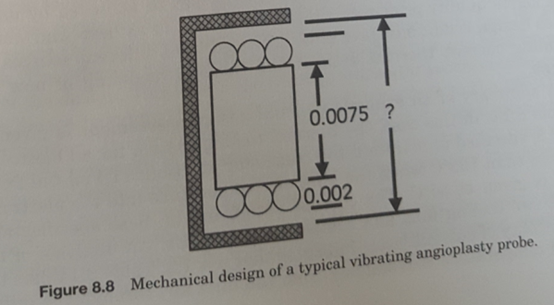 Using this RSS technique, it can be seen from Table 8.13 that the gap should be set to 0.0004 inches, regardless of whether one assumes three or six sigma incoming parts. The nominal of the cover will be equal to the nominal of the components of the assembly plus the gap, or 0.0133 inches. If the cover is given a similar tolerance of ±0.0002 inches as the purchased parts of barrel and wires, then the minimum of the cover (0.0131 inches) is in interference with the maximum of the assembly by 0.0004 inches (maximum barrel + maximum 2 wires =0.0077 + 0.0029 • 2 = 0.0135 inches). The expected defect rate is half the normal, since defects only occur on one side of the gap distribution.