All of the circuits so far considered in this book have been combinational. This means that their outputs are dependent only upon the inputs at that time. We now turn our attention to sequential logic circuits whose outputs are also dependent upon past inputs, and hence outputs. Put another way, the output of a sequential circuit may depend upon its previous outputs and so in effect has some form of ‘memory’.

General form of a sequential circuit

• A, the present (external) inputs to the circuit;

• y, the inputs fed back from the outputs;

• Z, the present (external) outputs from the combinational circuit;

• Y, the outputs that are fed back into the combinational circuit.

Note that the outputs, K, are fed back via the memory block to become the inputs, y, and that y are called the 'present state' variables because they determine the current state of the circuit，with K the ‘next state’ variables as they will determine the next state the circuit will enter.

It is often useful to think in terms of two independent combinational circuits, one each for the two sets of outputs, Z (external) and Y (internal), as shown m Fig. 5.2. Both of these outputs will in general depend upon the external, A, and internal, y, (fed back) inputs. 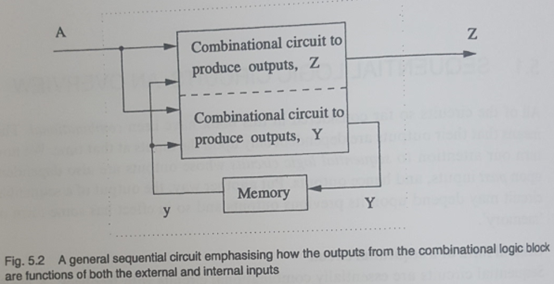 An important concept to appreciate is that sequential circuits can be considered at any time to occupy a certain ‘state’. These 'states’ are dependent upon the internal feedback, and in the case of asynchronous sequential circuits, the external inputs as well. At this early stage we simply note that if the memory in a circuit has digital lines leading to and from it then it can store 21 different patterns and hence the circuit possesses 21 internal states. (We call these internal states to distinguish them from the total states of the circuit which are also dependent upon the external inputs.)

This idea of the circuit possessing states is fundamental to sequential circuits since they are often designed and analysed by the manner, or sequence, in which the available states are visited for given sequences of inputs. This is why in Fig. 5.1 the internal inputs, y, and outputs Y, are labelled as the present and next state variables respectively (since they determine the current and next state of the circuit).