What is Asynchronous Counters?

What is Asynchronous Counters?

The outputs of the flip-flops will only change when the output from the preceding flip-flop changes to produce a negative edge. Since this will be once every clock period of the preceding flip-flop, the effect is for each flip-flop to produce an output with twice the period of the one clocking it. In effect the clock is divided down by 2 at each stage. Two flip-flops connected like this will produce a four-bit counter, and the three in Fig. 7.1 an eight-bit counter (23=8).

Any 2n-bii counter can be produced like this, whilst any particular count state for a counter built from n flip-flops can be decoded using an /r-input AND gate (or equivalent circuit) connected to the QOTQ from all flip-flops as required. 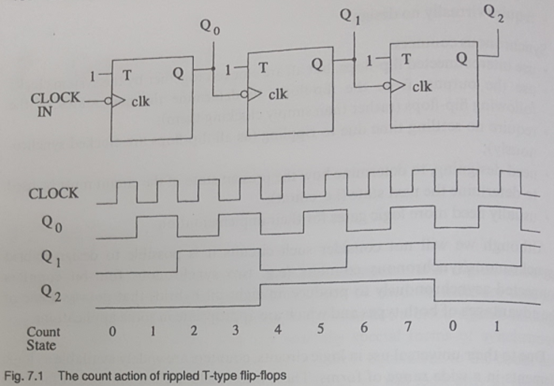