Sensirion has announced a new humidity sensor combined with a temperature sensor and signal processing circuits on the same chip, shielding it against noise.

The Swiss company says the SHTW2humidity sensor is extremely efficient, making it suitable for mobile phones, wearables, and wireless sensors inside factories or ventilation systems. It operates on 1.8 volts and consumes less than 3µA of power in standby mode, the company said. 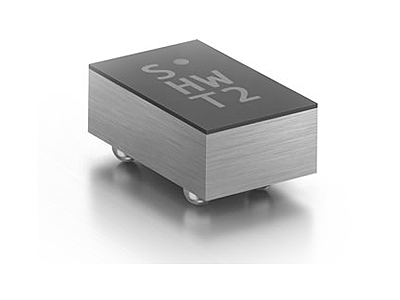 The new product can be seen this week at the Electronica trade show in Munich, Germany, where sensors appear to be one of the major focal points. First Sensor, for instance, showed a new pressure sensor for industrial fan controls, and Vishay Intertechnology revealed new proximity sensors that could be installed in buildings to automatically control lights.

That sensors are standing out at the event is hardly surprising. The German government is one of the most vocal evangelists for Industry 4.0, the idea of automating factories with data culled from sensors. It has been a pillar of the country’s national technology plan since 2011, and it was a major theme at this year’s Hanover Messe manufacturing trade show in Munich.

Sensirion built the new product using its CMOSens technology, which fuses the humidity sensor with an analog-to-digital converter on the same slab of silicon. It also contains a temperature sensor, which allows it to reliably measure the air’s dew point. The SHTW2 safeguards against errors that occur when measuring dew point with two separate sensors, the company said.