The following procedures are recommended when time and resources are not gating items. It is ideally suited for large-volume manufacturing, where the parts cost is low £ind the ease of collecting data is high. These procedures will increase the accuracy of the process capability and reduce its apparent variation with time.

1. Initial determination of process capability. Historical guidelines for variable and attribute data are given in Table 5.4. Each subgroup of data should be taken at a different point in time, preferably on different days. In this manner, day-to-day variations of the process could be integrated into the process capability calculations. There should be no allowance for process average shift in the Cpk calculations. For low volume applications, the moving range method should be used because of the low volume required. A discussion of the moving range method is given in the next section.

2. Regular updates of the process capability. The process capability should be regularly checked to determine if the process has changed. If the change is deemed significant using statistical tests, then a process quality correction project should be initiated to determine the cause of the process deviation. The amount of data required for checking the process could be less than the original data needed for initial determination. Determination of σcan be achieved either directly from the data or through the R estimator for variable data. For large-volume production, a sample size of 30 is sufficient to perform this check of process capability for variable data. For low-volume production, smaller sample sizes can be used and deviations tested for the probability that the average or standard deviation has shifted from the original, given a confidence interval. 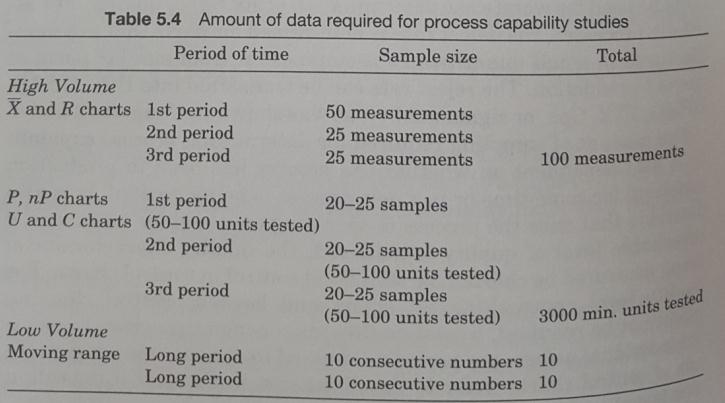 3. Correction of process capability based on regular updates. Correction should only be undertaken if the manufacturing process has shifted beyond normal statistical significance of 10%, for either variable or attribute processes，and the population distribution is assumed to be normal. To check normality, many tests are available, including the graphical and x2 (chi-square) tests discussed in Chapter 2. The distribution of the data should be symmetrical, with no skew. If not，the process should be investigated. Changes to the process capability should be tested as follows:

• Testing changes in the average (JL for variable processes. The 2 test is used for comparing sample average to the population average if the sample and population are both greater than 30. The t test is used to compare sample average to population average if the sample is < 30 and the population is > 30. If both the initial process capability and the process update data are less than 30, then a compound sample standard deviation term can be calculated to compare the two samples (population 〇• is either known or unknown). The purpose of this test is to determine if the average has shifted or not and, therefore, whether to recalculate six sigma process capability data for the average.

• The formulas for these tests against original population data are as follows:

for testing a large sample n with average X against a population (or large sample) of average |x and standard deviation σ;

• The formulas for testing current samples data against original sample data, when both are < 30 and with known sample sizes, are given in Section 5.4

• For testing changes in the <r, several tests are available, depending on the size of the samples taken. If the initial variable process capability population data is greater than 30, and the capability update data is less than 30, then the test can be used To compare current value of <r to the initial process capability Q when both data sets are under 30, the F test should be used. F tests can test for a level of significance (5% or 1%) to determine if the (T^ between the two data sets are statistically different. Depending on the results of these tests, the six sigma attributes are either retained or recalculated. The F test can also be used when two or more sample data sets originate from a common population. In that case, the differences between sample variability are either due to natural variation or a deviation in the product. More details on the F test are given in Chapter 7.