There are four different methods for determining the standard deviation σ of the population for process capability studies:

1. Total overall variation. All data is collected into one large group and treated as a single large sample with n greater than 30.

2. Within-group variation. Data is collected into subgroups, and a dispersion statistic is calculated (range). All ranges of each subgroup are averaged into an R. The σ is calculated from an R estimator {d^). This method is the basis for variable control chart limit calculations and discussed in Chapter 3.

3. Between-group variation. Data is collected into subgroups, and an average (X) is calculated for each subgroup. The standard deviation 5 of sample averages is calculated. The population <T is estimated from the central limit theorem equation, σ = s . n1/2. This method can be used to obtain process capability from control chart limits.

4. Moving range method. In this method, data is collected into one group of small numbers of data, over time. A range (R) is calculated from each two successive points. All ranges of each pair are averaged into an R. The 〇• is calculated from an R estimator (d2) for n =2, which is equal 1.128. Method 4 is the preferred method for time series data and small data sets from low-volume manufacturing.

For processes that are in statistical control, these methods are equivalent over time. For processes not in control, only Method is 2 insensitive to process variations of the average over time. Theσ estimate is inflated or deflated with Method 1 and could be severely inflated/deflated with Method 3. An example of a process out of control is one in which one subgroup has a large sample average shift as opposed to ''Waller average shifts in the other subgroups. Another way to advantageously leverage Method 2 to negate the effect of average shift is to use Method 4, with the data spread over time.

5 2_3 Example of methods of calculatingσ

Data for a production operation was collected in 30 samples, in three subgroups, measured at different times. The four different methods of calculatingσ are as follows. 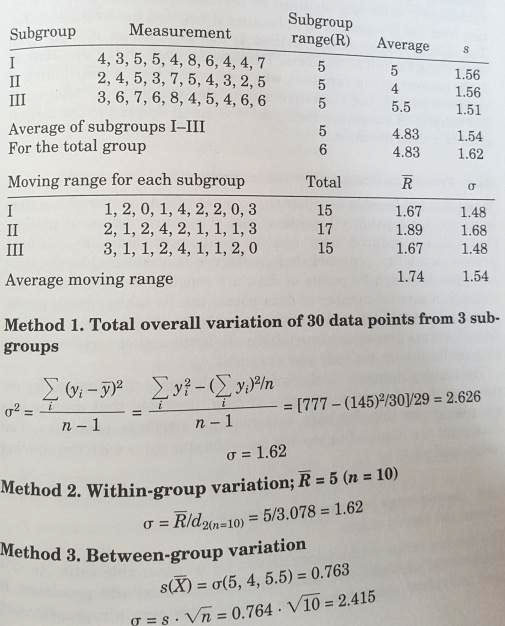 For each subgroup, obtain the average range between successive numbers;

As can be seen from Example 5.10, the a of the overall 30 numbers was 1.62 (Method 1). The 30 numbers were made of three subgroups(samples) with large shifts in sample averages. The closest indirectly calculated a value was obtained by Method 2, between-group variation from the R estimator of cr, because it negated the average shifts. The moving range method (Method 4) was as much as 10% off, even when using the full 30 numbers. The least accurate value was Method

3, the between-group variation, which derived a from a distribution of sample averages and the conversion of the sample to populationσ. The number of subgroups (samples) was small and led to the largest error in a determination.