Conventional PCB fabrication (raw PCBS) utilizes subtractive copper etching to produce circuitry. This process is generally carried out in a number of steps, as shown in Figure 6.6, where different metals are plated on the raw PCB only to be removed at subsequent processes.

This includes the bulk of the copper plated on the original laminate. Additive elements of the PCB have typically been restricted to metal plating operations and outside layer dielectric solder mask. Acid copper and electroless plating operations used in PCB fabrication utilize large amounts of wet chemistry. This chemistry is costly to the fabricator due to both the process control and effluent waste treatment required.

A fully additive process capable of achieving the desired electrical properties of raw PCBs without the use of wet chemistries could potentially reduce the PCB fabrication cost by reducing the costs associated with extra processing and waste management. 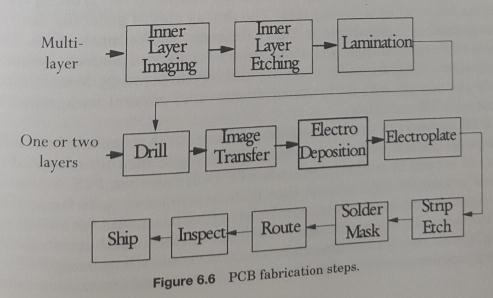 Additive processes will continue to become more prevalent in the future of the PCB fabrication industry. Currently, standard etching operations continue to decrease line width and space between the lines down to 2 mils. The critical limitation of the lines and spaces is the metal etching operation, which removes material in an isotropic manner.

Electronic component designs continue to become smaller with additional electrical performance requirements. This is driving designers and PCB fabricators to incorporate many electrical elements of the finished assembly into the raw PCB itself, either on the surface or buried within the layers. The passive components, such as resistors and capacitors, are beginning to be designed as buried elements within the PCB.

An additive technology that appears to hold great promise as a significant contributor to the future of raw PCB fabrication is polymer thick film (PTF). PTF is an attractive technology because it is fully additive and produces very little waste. The technology is also very easily processed. Typical applications use simple screen printing operations followed by a drying step. The drying step is generally done at temperatures comparable to that of current solder mask cures. The PCB fabrication industry is already very familiar with screen printing operations for both solder masking and legend printing. Most fabricators already possess both the equipment and general background to process PTF technology.

PTF technology can be used for applications that include both fully additive circuits and configurations that use a mixture of etched or plated copper in conjunction with PTF PCB features. PTF is already widely used for applications that include jumper circuits for product revision changes, precious metal plating replacements for switch applications， electrical shielding, and both surface and buried resistor configurations. Silver through-hole and via connections using PTF are very popular practices that are used in Europe and are gaining use in the United States. Fabricators of simpler raw PCBs can deposit pitching configurations and through-hole connections in a single printing pass. Inks are being used as part of filled via hole configurations to add hole wall integrity to the via as well as remove heat from high-density packages such as ball grid arrays (BGAs). These filled via connections can be used as part of buried via configurations for sequential and nonsequential configurations that utilize tag drilling.

Although fully additive circuits are currently possible using PTF inks, the application has generally been limited to low-power switching operations. The finished circuit trace consists of metal flakes encapsulated in a polymer binder. A nonhomogenous conductor is created by contact between adjacent flake material. Unfortunately, even the most conductive PTFs currently have line resistance values that are considerably higher than an etched circuit. The line resistance tends to attenuate electronic signals and produce line resistance.

In its current state, PTF additive circuits cannot become a replacement for high-power etched copper raw PCBs. If the line resistance and dimensional problems can be overcome, fabricators could benefit from the savings accorded to a “greener” method of manufacturing printed circuit boards. In the interim, PTF^s versatility for specialized applications should continue to provide PCB designers with good solutions to today’s complex electronic circuit designs.