In this system, component technology and process methodology selection is used in calculating the costs of the PCBs. A single cost driver is assigned to each PCB production or assembly step, including a driver for each type of component technology used. Through-hole (TH) and surface mount technology (SMT) are the most commonly used. The driver is a representation of the cost of the assembly function. The dollar per driver rate is based on the total costs for each manufacturing step for a certain period of time, typically a quarter, divided by the number of driver units processed by the manufacturing department for that period. Ail costs specific to the assembly step should be used in determining the driver rate, including costs for factory space, consumables, energy, supervisory and technical support, and equipment maintenance and calibration. The number of cost drivers used to determine the PCB costs will vary with the accuracy needed. A 15% accurate model can be constructed with 4 drivers, whereas a high accuracy system of 5% error should be made with at least 15 drivers. To be very effective in reducing' costs of new products, the cost per driver rates should be recalculated periodically (quarterly) at a faster rate than the new product development cycle. 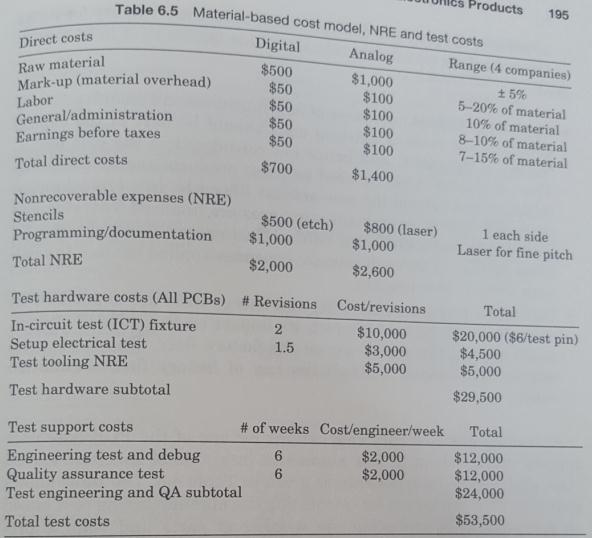 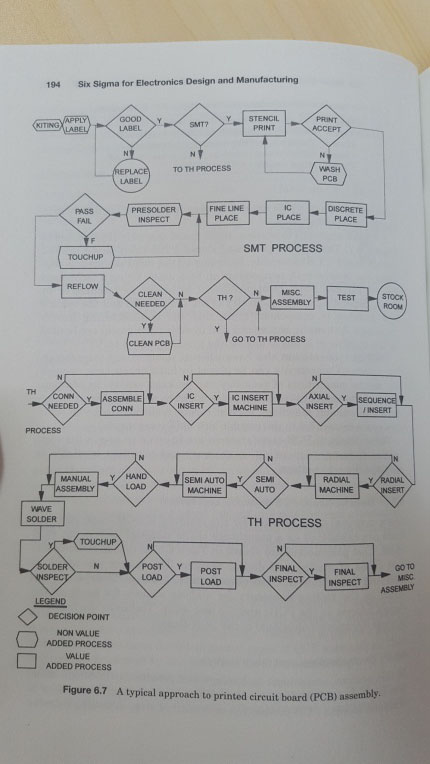 In order to simplify the determination of cost and quality for PCBs in the technology model, several extraneous factors have to be considered:

• Capital equipment purchases of new machines and modifications or enhancement costs of existing ones should be part of the capital budget of the plant, and hence not considered in the cost model This equipment might be used for other products and its useful life might extend beyond the new product life cycle. In a typical multiproduct company, equipment purchases are financed from retained earnings or borrowed from banks. Customers ultimately pay for these purchases through interest expenses applied against the balance sheet of the company.

• Utilization rates, consumables, and energy costs are dependent on the volume of the new product, its impact on the sales of current products, and the model mix on the factory floor. These rates can only be determined through the use of factory floor simulation runs.

An example of cost rate calculations for one of the PCB assembly process steps, which is the automatic insertion of machine-loaded through-hole (TH) components, is given in Table 6.6. The table shows a step-by-step procedure for calculating the manufacturing cost based on a typical PCB, including the number of parts and volume produced.

Table 6.6 starts with the advertised productivity information of the TH component insertion machine rate of 3000 components per hour (c/hour). A typical PCB, containing an average of 100 TH components, can be theoretically machine loaded in (100/3000) * 60 or 2 minutes. However, this rate is reduced by the stoppage of the machine due to misloaded components. The stoppage of the machine occurs every fifth PCB with a 7.5 minutes average time to clear the machine. This represents 1.5 minutes per PCB for a total machine run time of 3.5 minutes per PCB. Run time per component is calculated using the 100 components per PCB at (3,5 * 60)/100 = 2.1 seconds per TH component. This results in an effective insertion rate of 3600/2.1 = 1714 components/hour, down from the advertised machine rate of 3000 components/hour.

The second part of Table 6.6 calculates the cost driver rate for machine-loaded TH components. This rate is calculated from the 2.1 seconds per component, multiplied by the labor ($10 per hour) and the process overhead rate (100%). The cost driver is thus calculated at ($20/3600) • 2.1 = $0,0117 per machine-loaded TH component. This rate can then, be used as part of a PCB cost model containing most of the PCB processes shown in Table 6.7. 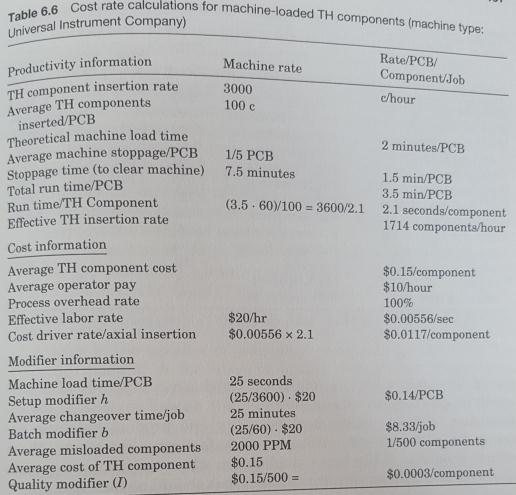 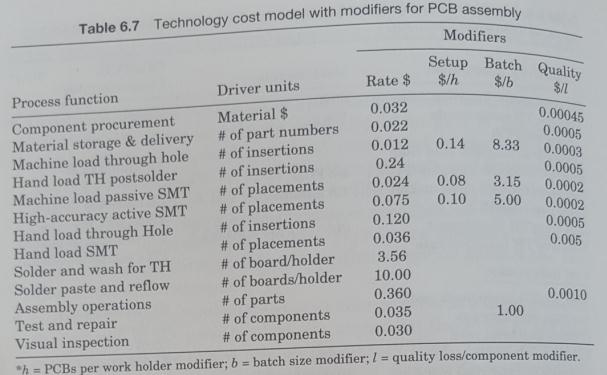