The manufacturing plan for printed circuit boards can change frequently. Some of the changes could be the batch run sizes, the work holder sizes, or the quality of the assembly process steps. This can have a significant effect on the calculations shown in Table 6.6. A more accurate methodology is required to make the cost calculation more reflective of the changes in the manufacturing cycle. Hence, the use of cost modifiers can make the cost model more flexible and responsive to changes in the manufacturing plans.

The modifiers represent the impact of changing manufacturing components and parts volume due to the new products being introduced. This might require additional purchase or upgrade of equipment, new factory layout and material flow, as well as updated manufacturing methods. Since machine setup and product batching account for a significant portion of manufacturing resources, these effects should be taken into consideration when estimating the costs of new products. Some of the modifiers that should be included are:

1.Batch run setup modifier. This modifier represents the setup requirements for each product part number. They include computer- integrated manufacturing (CIM) information transfer, the setup of the machine parameters, and first piece inspection for each batch. In PCB assembly, the setup times could be quite lengthy. For example, a third of the production time allocated for automatic insertion could be spent on properly preparing the components for sequencing prior to insertion. Many different techniques have been used to reduce this setup time, including permanent component allocation to loading heads as well as off-line loading of heads. These modifiers are in effect only at those operations where batch specific tasks are to be performed.

2.Assembly holder modifier. This modifier represents the load/unload time for each machine-based process step. It is highly dependent on the machine setup procedures and the type of work holder to be used. In PCB assembly，this modifier represents the allocation to the number of PCBs that can be processed in a single work holder at different process steps. In some cases, this holder can be the solder frame, while in other cases the PCB panel can be considered as the carrier. These modifiers are in effect only at those operations where positioning for loading and unloading is required.

3 Standard process modifiers. These are standard process steps that every PCB goes through without any special attention to the type of material or function of the board. They include universal process steps such as oven curing, soldering, or cleaning. To implement the use of the modifiers in PCB assembly, they could be calculated in terms of unit cost drivers per component, as shown in Table 6.7, for a typical PCB assembly of 100 components. This will allow for simple calculations based on the driver units of each process step to determine the total cost per PCB.

The procedure outlined above can be used to calculate all of the rates for individual manufacturing process driver units outlined in Table 6.7. The $0.0117 rate, calculated for axial automatic insertion in Table 6.6, is entered as the machine-loaded through- hole rate of $0,012 in Table 6.7. The cost driver unit for that process is the number of component insertions for the PCB. The setup modifier h for machine-loaded through-hole insertion is based on the number of PCBs that can be accommodated in the machine work holder. It takes 25 seconds to load each PCB into the machine. At the $20/hour effective labor rate, this amounts to (25/3600) • 20 = $0.14 additional cost for every PCB loaded on the machine. Since a PCB contains an average of 100 components, this cost represents an addition of $0.0014/component. This cost is halved when the work holder used can accommodate two PCBs at the same time.

The batch modifier b is based on the batch size or the number of PCBs in each job. For each new job, the machine has to be emptied of the previous job's components and then loaded with the programming information and the components of the new job. From Table 6.6, axial insertion machine changeover time is 25 minutes. At the $20/hour rate, this amounts to (25/60) • 20 = $8.33 additional cost for every PCB job loaded on the machine. For a typical job of 100 PCBs and 100 components to be machine loaded, this modifier represents an additional cost of $0.00083 per component. This cost is inversely proportional to batch size.

4. The material loss quality modifier (l) is based on the defect rate of the assembly process. From Table 6.6, the typical misloaded component rate for axial insertion is 2000 PPM> or 1 in 500 components. At the $0.15 typical cost of a through-hole component, the quality loss is 0.15/500 = $0.0003/component. When six sigma is achieved for all operations, the quality modifier could be deleted and the cost of quality can be determined at the next-highest level.

The rates for the various PCB operations in Table 6.7 are based on calculations similar to the ones for TH components, as shown in Table 6.6, including material, labor, overhead, and reject rates. The values of the modifiers h, b, and i depend on the current levels of tooling, scheduling, and quality of the manufacturing process.

The use of this cost method for PCB assembly will be rendered more effective in conjunction with a simulation of the PCB assembly area, which will determine the optimum levels for the setup and batch factors h and b. Typically, the batch size b in production is determined by the material acquisition and inventory policies of the manufacturing operations, while the work holder factor  h is determined by the relevant manufacturing equipment work area and the size of the PCB.

These modifiers can be best evaluated through many iterations of the simulation to determine an optimum operating methodology. For example, altering the material technology by switching to more SMT components, which are smaller, will help in reducing the PCB size. This will result in more PCB's per work holder and an increase in the value of h y and hence a decrease the cost of the PCB assembly.

A composite technology cost model using several manufacturers in the defense, instruments, and communications industries is shown in Table 6.7. For very high volume companies, the batch  b and work holder h modifiers are not used, since their PCB manufacturing includes a high level of automation in the setup as well as production, and therefore the setup time is reduced to zero.

Similar technology cost models could be built for other manufacturing processes, incorporating the yields of each step of the process into the model. Table 6.8 is an example of a list of cost model drivers for sheet metal fabrication. 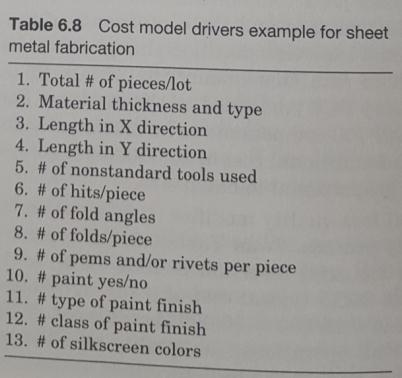