Screening DoE followed by in-depth DoE for defect elimination in thermal printer design. The design of new thermal printer for foil printing involved a team of many disciplines： mechanical, electrical, and software engineering. Each team member contributed to module design in his or her own discipline. When the team completed the design phase and began the verification phase prior to product introduction, it was discovered that the print quality defect level was too high. The team considered several alternatives to improve design quality. They decided to use DoE techniques in order to quickly resolve the design quality problems and deliver the new product to the customer on time and with high quality. The techniques they selected consisted of using a screening DoE to narrow down the list of possible design quality improvement factors, followed by a more in-depth DoE to optimize the remaining factors. The plan to achieve the design quality goals was as follows：

1. Identify the quality characteristics. Foil printing defects were classified and defined by the team according to three major categories: voids, which are defined as no printing when it is required; fills, which are defined as printing when none is required; and adhesion problems. Each classification was in turn divided into smaller categories. The number of defect opportunities was defined as the maximum allowed per foil card printed. It was decided to print 100 foil cards per experiment line. Only team members and not production workers inspected the cards for defects and classified them. The quality defect classification is shown in Table 8.17.

2. The team agreed on a pattern to print on the foil cards. The pattern was very difficult to print and it was designed in such a manner as to generate as many defects as possible. The pattern consisted of a completely filled square in the corner, small dots and empty squares at the lowest print resolution possible, as well as adjacent slanted lines and a cross inside a circle as close as possible to the print resolution. The pattern is shown in Figure 8.10.

3. The team decided on a screening DoE with an. L8 orthogonal array with saturated design of seven factors. Other factors that the team considered not significant were kept constant through the screening DoE. Many of the levels selected were exploratory and determined by varying the current design up or down by a small percentage to test its effect on the print quality. A summary of the factors, levels, and the screening experiment layout are given in Table8.18. 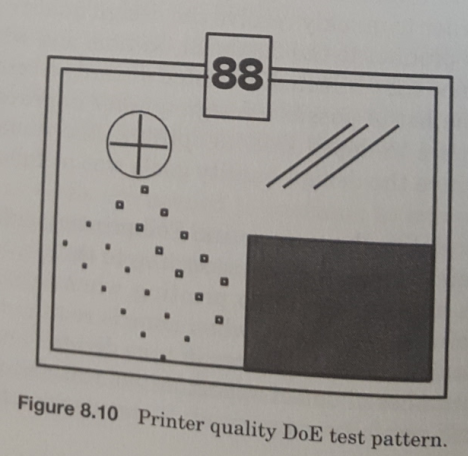 4.The screening experiment was run with 100 cards for each experiment line for a total of 800 cards. The team was pleased with the amount of defects generated, as they could be analyzed for better quality- The distribution of defects was different than anticipated, and therefore some of the defects that were classified earlier were combined in the seven categories shown in Table 8.19. The average number of defects per 100 cards was 73. 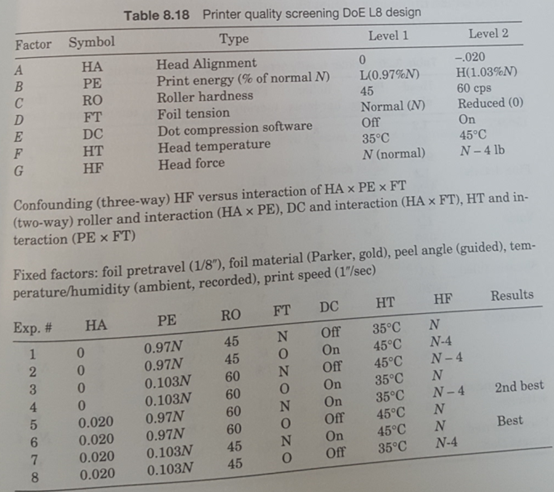 5.The defect data were analyzed for each type of defects, as shown in Table 8.20. Each set of three rows is a defect-type analysis, with the preferred level for low defects shown in the top line, the actual preferred level value in the middle line, and the percent contribution in the third line. For nonsignificant factors, the rows were left blank. It was decided from the data to narrow down the number of factors to four, and fix the other three factors to the level recommended by the experiment. The three factors fixed by the experiment were:

i. Roller hardness was set to level 1 (45 cps) since it was significant only in two defect types. Level 1 had the highest significance in bleeding defects.

ii.      Foil tension was set to level 1 (normal) since it was significant on most defect types except for bleeding defects.

iii.     Dot compression was set to level 2 (software on) since it was significant on most defect types except for bleeding defects.

Print energy was carried on to the next DoE even if it was not significant to any defect type, because the design team wanted to explore wider variations in the print energy than the 3% used in the screening experiment

6.      The in-depth DoE was performed for the remaining four factors at three levels. An L9 orthogonal array was used in saturated design. Additional levels were used to further explore the design space— two factors within the two levels of the screening experiment (head force and head alignment), and two other factors (print energy and head temperature) explored wider alternatives to the ones used in the screening experiment. The in-depth DoE is shown in Table 8.21. Each experiment line was repeated by printing 100 foil cards for a total of 900 cards.

7.      The results of the in-depth DoE are shown in Table 8.22. It can be readily seen that zero defects can be obtained for certain defect types at different printer settings. Obviously, a compromise setting will have to be made for the printer and zero printing defects will be difficult to achieve. 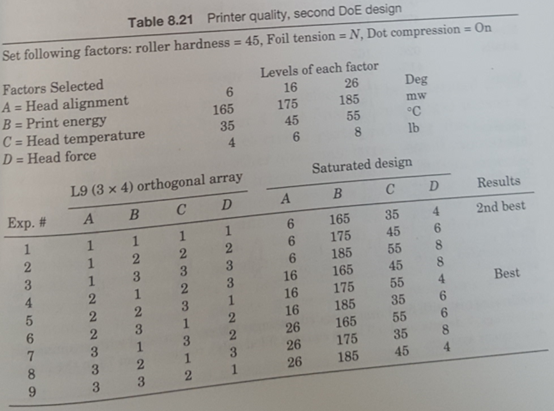