What is Boolean Algebra?

What is Boolean Algebra?

Boolean algebra is the mathematical language of digital logic circuits, which are simply circuits built out of the three gates (operations) introduced above. It provides techniques for describing, analysing and designing their operation. Using the above descriptions of the operation of the three basic gates, and their Boolean descriptions, Y=A, Y=A+B, the additional rules and laws of Boolean logic which are needed will now be introduced.

As the heading suggests, this section details those rules which describe the operation of logic gates when only one variable is present. Note that these laws, given in Table 1.3, provide exactly the same information as the truth tables.

The OR operator gives exactly the same result and these laws give the output in rows 1 and 4 (see Table 1.2) of the truth tables.

The law of inverse elements describes the effect of operating on a variable, Ay with its complement, A. For the AND gate this gives Y^A  A=0y since A and A must have complementary values and therefore 1^=0.

For the OR gate + = since either >4 or A must be 1. This law describes the operations in rows 2 and 3 of the truth tables.

This describes the effect of operating on a variable twice with the NOT operator (i.e. passing a signal through two NOT gates). The effect of this is to return the variable to its original state. So Y=A=A.

Note that the truth tables could be derived from the above three laws as the give exactly the same information. It will become apparent that there is always more than one way of representing the information in a distal circuit, and that you must be able to choose the most suitable representation for any given situation, and also convert readily between them.

The above laws give all of the information held in the truth tables. However another way of expressing this information is as the properties of identity elements. These just give the output of the AND and OR gates when a variable, is operated on by a constant (an identity element). (So for a two-input gate one of the inputs is held at either 0 or 1.) Obviously these laws, shown in Table 1.3, can also be used to completely determine the truth tables. 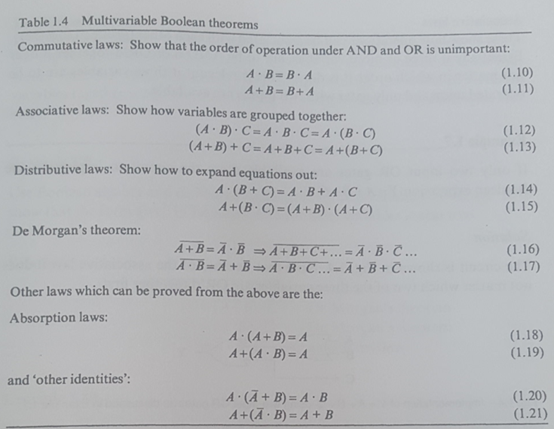