The general form of a synchronous sequential circuit is shown in Fig. 8.1. To recap, this has: external inputs, A, and outputs, Z; a combinational block can be considered in two parts; and 'memory’ in the form of flip-flops. The two parts of the combinational block serve to provide the internal outputs to the flip-flops, Y, and the external outputs, Z. 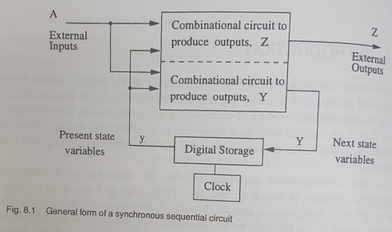 Obviously a circuit could have a simpler form and still be a synchronous sequential circuit. For instance it may have no external inputs or the external outputs may be functions of only the flip-flop's outputs (the present state variables). Consideration of such simplified circuits leads to a useful way of classifying sequential synchronous circuits.

Autonomous circuits are those with no external inputs (except for the clock line) and which therefore perform independently (autonomously) of other circuits around them. Such circuits move through a set cycle of states as the circuit ^ clocked. The synchronous counters in the last chapter come into this category- However, the states of a general autonomous circuit obviously need not follow a binary sequence and furthermore the external outputs need not simply be the outputs from the flip-flops (as with the synchronous counters) but could be functions of these (present state) signals. An example of an autonomous circuit is presented in Section 8.3.1.

The next state of a general synchronous sequential circuit is dependent nor only on the present state, as in an autonomous circuit, but also on the external inputs. Such general circuits can be further subdivided into two classes which are commonly referred to as Moore and Mealy models.