At the output of all gates there is a capacitive load (CL) caused by the input capacitance of the next stage. This could be a printed circuit board interconnect or quite simply an oscilloscope lead. With the DTL circuit of Fig. 9.2(a) when the output changes from low to high, this capacitance (C^ has to be charged through the collector resistor R3. Hence the delay time for the output to charge from low to high (i.e. ‘0’ to ‘1’）is limited by the time constant R3 x CL. To reduce this we could just reduce the value of R3 but then the power consumption will increase when the output transistor T1 is on.

The totem-pole output Fig. 9.3 gets around these problems. When the output is charging, the time constant is now dependent upon the resistance of the transistor T4, diode D1 and R4. Since R4 is only 1300 and both T4 and D1 are on then the time constant is much smaller than the DTL output circuit and hence the low-to- high delay is greatly reduced. In this case the transistor T3 is off and power consumption is low. This type of circuit is called an The presence of both DI and R4 are essential for the reliable operation of the TTL output stage. When the output is low, i.e. T3 on, the base of T4 is at a potential of: Vbe3 + Vcesat2 = 0.7+0.2 = 0.9V. Since the output is 0.2V then this is insufficient to turn on the combination of T4 and D1 which results in no current being drawn from the supply. However, without the diode Dl, then T4 will turn on and current will flow into T3 thus consuming power and the output voltage will rise (due to the resistance of T3) to a level between a low’ and a £high’ (i.e. an illegal state). Hence Dl is inserted to keep T4 turned off when T3 is on. Resistor R4 is present so as to limit the current when the output is high and thus provides a short circuit protection if the output is inadvertently tied to 0 V.

Many other logic gates can be implemented with the standard 74 series. What function does the circuit in Fig. 9.4 perform? Assume F1L=0.2 V and KIH=3.6V. 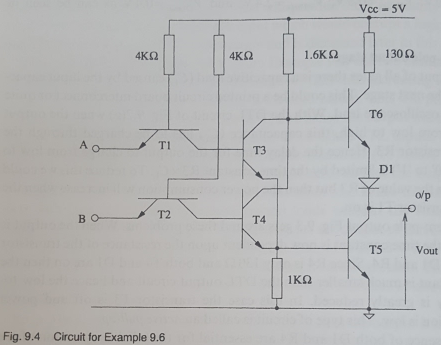 Since the output is only high when both inputs are low then the circuit functions as a two-input NOR gate.