The standard TTL series has a typical propagation delay of 10ns (the term propagation delay was introduced in Chapter 4 and will be covered in more detail later hauler) By this we mean that when an input change occurs it takes 10 ns for effect to propagate to the output. In the early 1970s it was found that this for this propagation delay could be decreased by replacing those transistors that saturate clamped transistors.

So far we have seen that when a transistor turns on it enters saturation. This e j；s given to this condition because the base is saturated with charge. Before a pirated transistor can be turned off this charge must first be removed. This can take a considerable amount of time and thus slows down the switching speed of the device. Preventing the transistor from entering saturation will therefore increase the switching speed. The Schottky TTL series uses such a technique by connecting a Schottky diode between the base and collector of the transistor to stop device entering saturation. Hence these circuits are much faster than the non-Schottky clamped series. 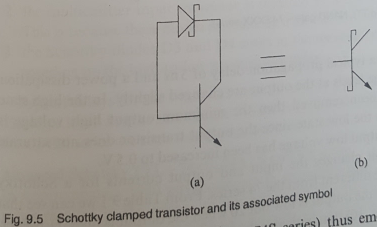 The Schottky series (labelled the 74S series) thus emerged as a high-speed replacement for the standard 74 series. The circuit diagram of a two-input N AND gale implemented with Schottky clamped transistors is shown in Fig, 9.6, Apart from the use of Schottky transistors the circuit also has other improvements. The output diode D1 has been replaced with two transistor stages T3 and T5. This again provides two 0.7 V drops between the T2 collector and the output so that T5 is not turned on at the same time as T6. However, the two-transistor arrangement without the diode also improves the output current drive when the output is in the high state. In addition, Schottky transistor T4 is included so as to improve the switch-off time of transistor T6. 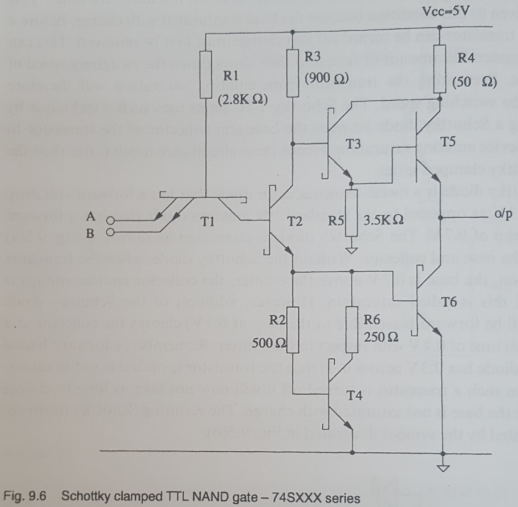 The 74S series has a typical propagation delay of 3 ns and a power dissipation of 20mW. The voltage levels at the output are changed slightly. In the high state since the diode has been removed then the minimum output high voltage is increased to 2.7 V. In the low state since the output transistor does not saturate then the maximum output low voltage has been increased to 0.5 V.

Due to these circuit changes the input and output currents for a Schottky clamped 74S series are different from the 74 series. From Table 9.1 we can see that the fan out is 10 when the output is low but 20 when the output is high. However, it is the lower value (i.e. 10) that indicates the number of loads that can be driven.