The low-power Schottky clamped TTL logic family (74LS series) was released i〇 1975. This, as the name suggests, has a lower power dissipation than the 74S series. A circuit diagram for a two-input NAND gate is shown in Fig. 9.7. The main differences from the 74S series are 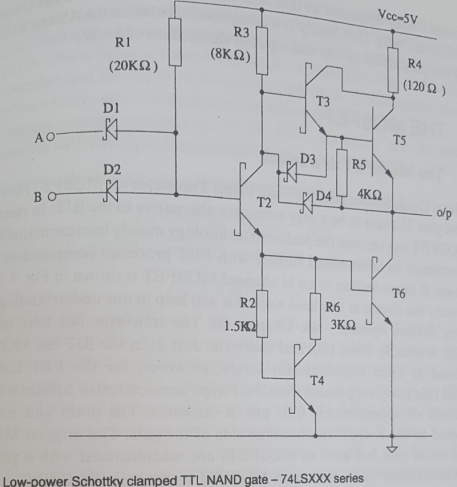 1.      larger resistors are used throughout to reduce power consumption at the expense of longer propagation delays;

2.      the multiemitter input transistor is replaced by Schottky diodes D1 and D2. This is because these diodes can take up a smaller area on chip;

3.      the Schottky diodes D3 and D4 assist in the removal of charge from T5 thus speeding up the high-to-low propagation delay.

Typical delays for the 74LS series arc 10 ns with a power dissipation of 2mW. The logic levels are the same as the 74S series whilst the input and output currents for a 74LS series are such that the fan out is now 20.

Advanced Schottky TTL ~ 74AS, 74ALS and 74F series an approximately 1980 advancements in manufacturing of the 4S and 74LS series resulted in the release of the Advanced Schottky (74AS) and Advanced Low-power Schottky series (74ALS), respectively. As can be seen in Table 9.1, the ALS and AS series provide a much faster propagation delay tune than the LS and S series, respectively. Also the ALS and AS series have a significant reduction in power consumption when compared to their associated LS and S series. These improvements have been achieved by implementing the design with smaller transistors (due to improvements in manufacturing), by increasing resistor values slightly and by using subtle circuit modifications.

Another family appeared at this time and that was the 74F series (sometimes referred to as Fast). This family is a compromise between the AS and ALS series having a typical delay of 3 ns and a power dissipation of 4mW.