The MOSFET as a Switch

The MOSFET as a Switch

The Metal Oxide Semiconductor Field Effect Transistor (or MOSFET) has proved over the past 15 years to be a very attractive alternative to the BJT. In recent years the MOSFET has become the preferred technology mainly because manufacturing improvements have advanced further with FET processes compared to bipolar processes. A cross-section of an N-channel MOSFET is shown in Fig, 9.8(a), We shall study the device at this level since this will help in our understanding of how memory devices operate - see Chapter 10. The transistor has four terminals: gate(G); source(S); drain (D); and substrate. Just as in the BJT the MOSFET is composed of three semiconductor layers. However, for the FET the middle terminal (the gate) is separated from the P-type semiconductor substrate by a thin gate oxide of approximately 0.05 M111 m thickness. The drain and source are connected to the N-type regions either side of the gate. The original MOSFETs used a metal gate but now all MOSFETs are manufactured with a polysilicon gate,4One symbol for an N-channel MOSFET is shown in Fig. 9.8(b).

The device operates by using the voltage on the gate to control the current flowing between source and drain. When VGs is zero, application of a positive voltage between the drain and source (VDs) will result in a negligible current flow since the drain to substrate is reverse biased. When VGs is increased in a positive direction electrons are attracted to the gate oxide-semiconductor interface. When VGs is greater than a voltage called the threshold voltage (FT) the P-type material close to the gate oxide changes to N-type and hence the source and drain are connected together by a very thin channel. Now, when a positive voltage, VDS, is applied a current, IDS will flow from drain to source and the transistor is said to be turned on transistor can be turned on even more by further increasing the This is because more electrons are attracted to the oxide-semiconductor interface and the depth of the channel increases. Consequently the resistances between source and drain reduces thus increasing the current 7^. current-voltage relationship of the MOS transistor can be modelled approximately with two equations depending upon the value of VDS.

where K=(WIL)μCox and W and L are the width and length of the gate; /i is the mobility of carriers (this is a measure of the ease at which a carrier can pass through a semiconductor material); and Cox is the oxide capacitance per unit area of the thin gate oxide region. Physically, the length of the gate is the distance between the drain and source and is marked as L in Fig. 9.8(a), whilst the width W is the dimension into the page. Since increasing K increases /DS then K is sometimes referred to as the gain of the transistor even though it has dimensions of MA V These MOS equations thus allow the voltages around the transistor to be calculated.

Let us look at a simple N-channel MOSFET inverter (illustrated in Fig. 9.9(a)) as a means of illustrating the application of this type of transistor. Here, the transistor can be thought of as a switch such that when VGS is greater than the threshold voltage, VT (typically 1 V), then the transistor will turn on. Therefore current flows from the supply through the load resistor /?L, through the transit to ground KJ. As KGS increases the current flowing will increase and by choosing the appropriate value of RL then the voltage at the output will be pulled down towards 0 V. If on the other hand the gate-source voltage is less than VT then transistor is turned off (i.e. the switch is open) and the output is pulled up to (usually 5 V). This circuit thus operates as an inverter or a NOT gate. From bipolar section we can see that the NMOS device operates as an active pull-down whilst the resistor is called a passive pull-up. 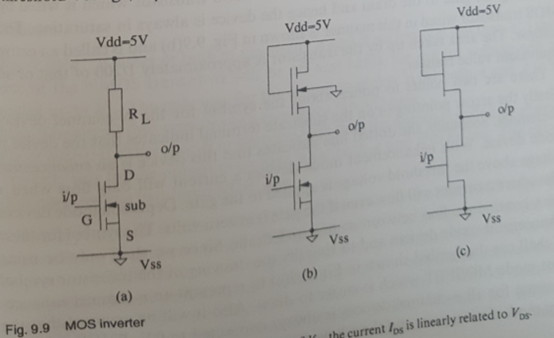