What is CMOS Inverter?

What is CMOS Inverter?

A CMOS inverter is shown in Fig. 9.11. It consists of one NMOS and one PMOS transistor. The PMOS device is indicated by the negation sign (i.e. a bubble) on its gate and has a negative threshold voltage of typically -1V. To turn on a PMOS device we require a voltage, VGS, more negative than -1 V. Notice that the two drains of the two MOS transistors are connected together and form the output whilst the two gates form the single input. Due to the difference in the mobilities of the two devices the PMOS device is made with its W/L ratio 2-3 times larger than the NMOS device. This results in the two transistors having the same value of K so that both will have the same electrical performance. 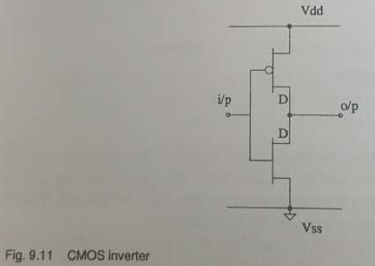