We have seen how to implement the logic gates NAND and NOR using NMOS technology. In CMOS the process is just the same except that the complementary PMOS transistors are added.

What function is implemented by the circuits shown in Fig. 9.13(a) and (b)? Although not shown you should assume that the gate inputs labelled A are connected together (similarly for gate input B). 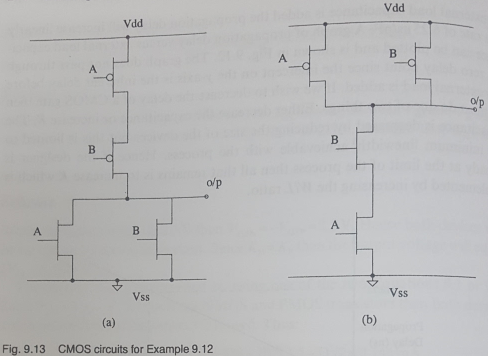 Note: as for the CMOS inverter when the inputs are held static at either logic 1 or logic 0 then one transistor is always off between and the current flow is just due to the leakage current of the off transistor. The static power dissipation is therefore again extremely low.