How to Determine Gauge Capability

How to Determine Gauge Capability

An important part of capability studies when measuring the total variability in manufacturing is to account for gauge or test process variability. Variability is not limited only to the manufacturing process; the variability of the measurement system needed to test the manufactured parts should also be considered. Figure 5.6 shows typical sources of variation and error in a process and its measurement system. The majority of measurement errors, including those due to the operator (appraiser) or the equipment (gauge), can be measured and quantified through gauge reliability and reproducibility (GR&R) methodology. The use of GR&R to evaluate measurement systems quality is mandatory in achieving six sigma quality.

The following is an explanation of the terms used in Figure 5.6.

• Short and long variations in the manufacturing process are due to time-dependent parameters, such as incoming part changes, age of equipment, and methods for maintaining equipment, They will be discussed in the next section. 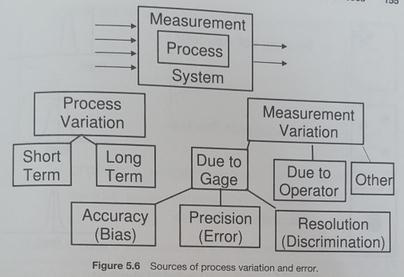 • Accuracy is a relative measure of achieving the measurement target. It is the difference between the true and measured values, although the true value may not be known in many cases. Accuracy is usually referred according to some standard of measurement. Hence, it is an indicator of the measurement error average of μ of the equipment (gauges). Accuracy and precision are shown in Figure 5.7, using a target analogy.

• GR&R is the root sum of the squares (RSS) value of repeatability and reproducibility. It should be noted that the average or the process and measurement errors add up algebraically, whereas the standard deviations add up in the squares, as shown in Figure 5.8 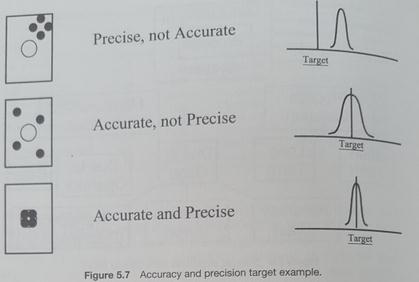