What is GR&R methodology

What is GR&R methodology

1.The parts to be used in the GR&R study should be identified. Up to 10 parts are normally used from the same production process.

2.Up to three skilled operators should be identified to make the measurements. They should be familiar with the parts and measurement equipment.

3.Each operator then measures each part on the same equipment several times; these measurements are called trials. Usually up to three trials are made by each operator. 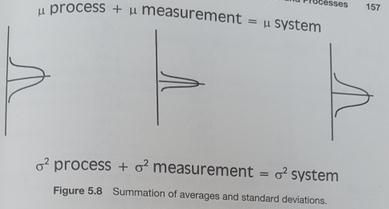 4.The errors are thus generated by n parts，which are measured and repeated r times by different operators (A, B, and C). It is assumed that the GR&R measurement encompasses 99% of the normal curve variation of all measurements. This results in an error of 1% and f{z) - 0.01/2 or 0.005, corresponding to a z value of 2.575σfor each side of the normal curve. A total of 5.15σ constitutes the total variation for the area inclusive under the curve for GR&H calculations.

5. Repeatability, or equipment variation (EV), is measured by 99% of the error span due to equipment. This is equivalent to 5.15 which in turn is derived from the R= average R’s of each operator:

Reproducibility, or appraise variation (AV), is measured by 99% of the error span due to operators. This is equivalent to 5.15 <σAV which in turn is derived from the Xdiff = range of operator averages and the factor d% from Table 5.6. The error inherent in the equipment variation (SV) has to be removed from the appraiser variation (AV). The <σAV is based on the root sum of the squares of observed operator variation minus the normalized equipment variation, the latter divided by the number of measurements: 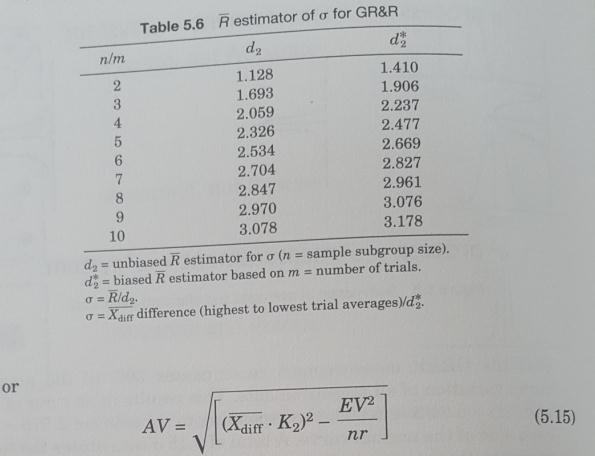 The GR&R is calculated from the RSS of EV and AV. In most cases, it is expressed as a percentage of the total specification span.